Daniel Coyle on CHS Krooze wins again in $36,000 Accumulator at The National

LEXINGTON, Ky--Daniel Coyle of Ireland on CHS Krooze won his second speed class, the $36,000 Accumulator CSI4* class, at The National on Nov. 1. 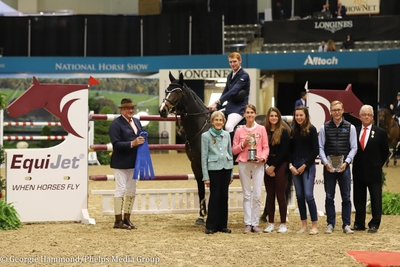 Daniel Coyle CHS Krooze. Bunty Armstrong, left, presents the Whitney Stone Challenge TrophyOne of the most fun and creative classes of the event, the Accumulator featured 10 fences of increasing difficulty, where points accrued for each fence cleared.

At the final fence, riders could choose to jump the number 10 obstacle and earn the associated 10 points, or they could take the harder ‘Joker’ fence, worth 20 points.

Clearing the ‘Joker’ jump earned 20 points, but knocking it down deducted 20 points from the total tally.
Image

HALF THE class, 12 of the 24 entries, rode to perfect scores over the course designed by Ken Krome (USA).

Coyle finished in a blazing 46.16 seconds to capture victory, with Lillie Keenan on Agana Van Het Gerendal Z, also on 65 points in 48.40 seconds and Conor Swail of Ireland on Gamble placing third with 65 points in 48.63 seconds.
Image

"Krooze is actually my own horse, and she has been incredibly consistent all year, but every show I show her in she gets better, as she has proven here," said Coyle. "She has been second once and first twice and only jumped three classes, so that is pretty incredible! She still impresses me every time I go in the ring so I am delighted with her.”

“I got her at the start of the Florida season last year and started riding her myself," said Coyle. "She has been great from the word ‘go’. It has been a little bit of me getting to know her, more than her getting to know me, but I think now both of us have clicked and know each other really well. That is probably why we have become so consistent.”

“The accumulator class is hard actually because every jump is a little bigger and then they sneak the ‘Joker’ in at the end, plus it is a speed class so it takes a clever horse to realize that the jump goes up," he said. "She is very clever, though, and it just all kind of went my way. She is always going to be fast, so it is more just getting her used to this height, but I knew she could handle it.”

“This is my first time here and the show has been great," said Coyle. "It's a good atmosphere and a real indoor-type atmosphere that you don’t get in too many places over here. I really like the show and I will definitely come back!”