Alex Granato won the $135,000 Jumper Classic at The National

LEXINGTON, Ky.--Despite going early in the 20 horse jump-off of the $135,000 International Jumper Classic CSI4* at The National Horse Show on Oct. 31, Alex Granato of Lexington, Ky., on Carlchen W finished in the quick time of 32.76, quick enough that no one in the 16 that followed him were able to overtake him. 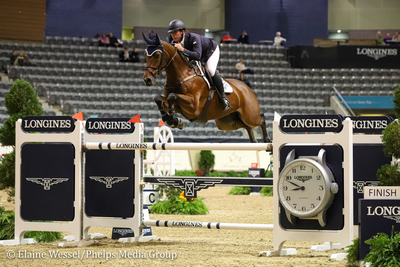 Alex Granato on Carlchen WThe class was a qualifier for Saturday’s $225,000 Jumping World Cup, with the top 40 making the cut. 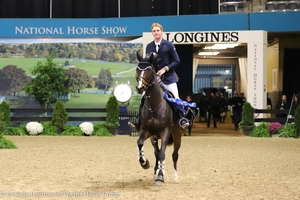 Daniel Coyle on HS Kroozen the evening class, Ryan on Eddie Blue was first and finished in 34.60 seconds, and three trips later, Granato, turning on a dime after each fence, raced to a final time of 32.76 seconds, almost two full seconds faster with the majority of the pack left to ride. Sixteen pairs tried to beat the early leaders, but only two even came within one second of Granato.

One of the 2018 World Equestrian Games team gold medalists, Sternlicht rode Toulago to second with a clear jump-off time of 33.510 seconds and Allen’s  time of 33.620 seconds on Lafayette Van Overis gave him third.

On Saturday Granato will try to add a third World Cup victory to his resume for the year, having won the $208,200 Jumping World Cup in Wellington last February and then the $135,000 World Cup in Columbus in October.

“This is my first class here for the week," said Granato. "I didn’t do a warm-up class, so I just wanted to do a smooth first round. I didn’t get to watch anybody go, so I just tried to stick to my plan and the numbers that I walked. It was a nice course that flowed well for my horse. Coming off of Washington, Carlchen W felt great in this ring with a bit more room, and I couldn’t have been more happy with him.”

“We have really gotten to develop to this level together," said Granato of his horse. "We got him as a 5-year-old, and he is 11 years old this year. This is our second year competing at this level so I think that we know each other really well and it is a big benefit to each other when we go into the ring. I think it helps that we go in knowing what to expect.”

“I was a bit back and forth if I even wanted to jump off because my focus is for Saturday night, but it was a good money class and the horse felt great so I figured I would take a shot," said Granato. "There were fast riders before me and fast riders after me, so I just tried to stick to my plan and the numbers I walked. I am lucky that he is a naturally fast horse and that works in my favor. Everything came up smooth and in stride so I was happy with it.”

My fall schedule "was all based off of wanting World Cup points," said Granato. "My whole beginning of the year was geared towards getting to the Pan American Games, and after that was done I wanted to focus towards World Cup and being as prepared as I could by doing a few indoor shows before heading south to Florida. Carlchen is feeling great! He jumped Washington really well, and I didn’t expect him to feel as good as he did there. He feels even better here so I am happy with how it is going so far.”

“Any big win certainly has its meaning and is special, but I really love this horse show," he said. "Of all of the indoor horse shows, this is my favorite. We do live here now and our farm is just right up the road so it is nice to be at home and get to come into a show with this much history and come in and do well.”

In the faults-converted format, a knockdown added three seconds to the time to determine a final score.

First to tackle the track, Keenan rode Agana Van Het Gerendal Z to a solid standard as the pacesetters, crossing the finish line in 53.920 seconds to eventually finish third.