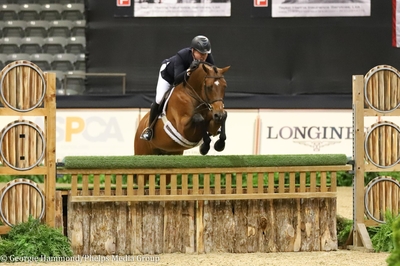 Scott Stewart on LucadorStewart and Lucador, after years of winning championships across the nation, won their final Grand Champion Professional Hunter title in their last show together.

Stewart and the 11-year-old Oldenburg gelding competed in the High Performance Hunter division, taking top three placings in all of the over fences classes and first in the under saddle class over the course of the two days, resulting in their championship in the division.

Dr. Betsee Parker's Lucador had already won the Grand Championship four times, so this was his fifth time.

LUCADOR will now compete in the Junior 3’3” Hunters 15 and Under with Maddie Tosh.

Stewart was once again the Leading Hunter Rider winning this for the 13th time by accumulating points with seven horses, including Everwonder, Cabrio, Critics’ Choice, Lucador, Private Life, Catch Me and Cameo.

"Lucador has been great every year since Betsee bought him as a pre-green horse," said Stewart. "This is his last show with me, so it was a great way to end with an awesome win. It is bittersweet that this is my last show with him, but I had probably one of my best rounds today so that was great. He might go Friday night (in the Hunter Classic).  Betsee and I will talk about it, but it couldn’t get any better than going out champion. He has definitely been champion and grand champion everywhere.”

“He has pretty much been the same horse since he was 4 years old," said Stewart. "He can be really great but also show his not-so-good side sometimes but he actually behaved really well here. He has always been really confident about the jumps and a beautiful mover and jumper. It has been great. We haven’t really over-shown him. He has only really shown seven or eight times over the past few years, so he has stayed pretty fresh.”

“It feels great," said Stewart of being Leading Rider. "It is something I always try to achieve but it is getting harder every year so I am really happy about it.”

“Lucador is now headed for Maddie Tosh, the expert rider of a 3’3” Junior Hunter who is 15 and under, for the last two years of his show career," said Dr. Parker. "Scott feels that she is ready to take the reins, and Lucador has proven everything he can in this division, so we are really excited to see him in his new incarnation next year."

“Scott and I have worked together and known each other a long time, and every time I watch him I feel like I am watching a work of art in progress," said Parker. "When I watch him ride my horses I never feel like I ever could have done any better because, to me, he is the consummate rider I never could have been and never have been. I really am his biggest fan. Over all of these years there are so many people that have appreciated him. He and I are like brother and sister, we are in contact every single day and I could never tell Scott how grateful I am for him.” 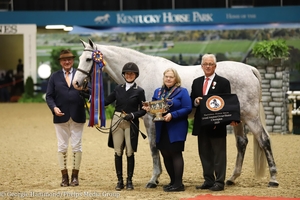 Becky GochmanThis is Gochman and the 12-year-old Holsteiner gelding’s second year in a row taking the AO Grand Championship.

With “Snoopy,” Gochman has won a great deal across the country, most recently taking Grand Amateur-Owner 3’6” Hunter Champion at the Washington International Horse show.

“‘Snoopy’ is the horse of a lifetime because he has all the movement in the world under saddle and the form over fences, which you don’t get very often," said Gochman, who trains with Stewart. "His mouth is as light as a feather, so he goes in the lightest rubber bit there is. You never really have to tough the reins on him, and he is highly intelligent. He knows what to do to win and he enjoys jumping correctly."

"Snoopy has so much talent and has been brought along correctly and slowly by Cookie Beck and Scott Stewart," said Gochman. "He has had a lot of magic put into him which really equates to a lot of hard work. His talent makes him so special, and I will never have another horse like him. Sambalino and Catch Me were both horses of a lifetime, and I am thankful to be able to sit on horses like that. Sometimes I think about Sambalino when I am going around the ring, and I feel like Sambalino still gives me a little power there. I feel like both of them have been incredible mounts."

“I would just like to thank the National Horse Show for having such beautiful courses and natural fences, and my competitors who are so fun to ride with, I appreciate all of them," said Gochman. "My heart is filled with gratitude for my horses, the sport and my family.”