Laura Kraut on Fleurette won the $136,300 World Cup in Washington

WASHINGTON, D.C.--Laura Kraut finally added a title she has been coveting to her record at the 61st Washington International Horse Show (WIHS). 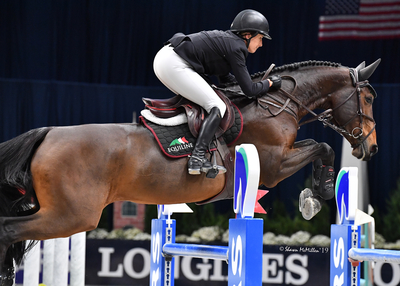 Laura Kraut and Fleurette (Photo by Shawn McMillen Photography)Riding Fleurette, Krautwon the $136,300 World Cup, a qualifying class for the finals.  on Saturday, October 26.

“It’s been a class that I wanted to win for many, many years,” said two-time Olympian Kraut, who was fifth in the class in 2018 riding Confu. “I think I’ve been jumping in the international division here since the late ’80s. I’ve had quite a few seconds and thirds and fourths, but it’s just always seemed to elude me. I said at the beginning of the week, ‘I think this is going to be my week.’”

Kraut first competed at WIHS in 1978 in the pony hunter divisions.

AS THE SEVENTH to go, Andrew Welles and Primo Troy were the first pair of the 30-horse field to go clear over Olaf Petersen Jr.’s first-round course. 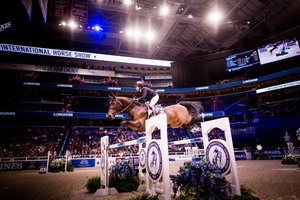 Laura Kraut on FleuretteThe packed crowd in Capital One Arena waited to see another clear round until Kraut and Fleurette came into the ring as the final horse to jump, and a massive cheer went up when she made the jump-off.

“I didn’t change my strategy in the first round, but I watched Andrew go,” Kraut said. “When he came out, I said to him, ‘You rode that perfectly.’ He rode it right on. He and I had sort of walked the course at the same time and talked about it. That was the plan we had. I just thought I would do that. Fleurette lets you ride her, and she’s really good at letting you place her to the jumps. It was just a matter of making sure I stuck to it!”

In the jump-off, Welles ran into trouble on an early turn with Primo Troy, a 10-year-old Irish Sport Horse.

The stallion stopped, and after Welles circled and finished the course, they had 12 faults in 45.69 seconds.

“I tried to lay down the best round I could,” Welles said. “With a rider like Laura behind you, you want to take a shot. I tried to do that. Unfortunately it didn’t work out, but I’m thrilled with my horse tonight.”

Kraut did have one rail in the jump-off, but with four faults in 40.99 seconds they secured the win.

Brianne Goutal Marteau finished third on Viva Columbia after finishing the first round with one time fault.

“In the beginning, I have to be a bit conservative, but then I really felt her open up," said Marteau. "She was much quicker throughout the rest of the course. It was a tough test, but it was great sport. It’s one of the few indoor shows where you really get that city feel with the huge crowds. It’s a gem we want to hold onto.”

With only one clean until the last horse, Petersen said that he changed seats a few times as the class went on.

“I was thinking each seat was bad luck,” he said. “I think it was a fair class. It was very exciting. We saw some really good rounds.”

Fleurette joined Kraut’s string in May, and Kraut has high hopes for the mare.

“She’s one of these horses that I think has all the jump, all the scope, is careful, is brave, is sensible, and lets you ride her." said Kraut. "The only thing she’s missing at this point is the mileage at this level.”

The mare shipped across the Atlantic to show, as Kraut is based in England.

“She flew to New York on Sunday, was in quarantine on Monday and Tuesday, and then got on a truck and came straight here," said Kraut. "She’s just amazing because not a lot of horses could put up with that.”

“I didn’t know how this show would suit her,” Kraut said. “I don’t know how much she has done indoors. One thing I do know is that she’s just such an intelligent horse. She takes everything in stride, nothing really bothers her. She’s handled jumping in a big ring like Aachen beautifully. She’s handled pretty much anything I’ve asked of her so far, and that’s just a little bit her personality. She’s a work horse.”

“This is a fantastic horse show,” she said. “I come back for it every year. Normally I’m in Europe, going full throttle, but I always have taken the time to come back and jump at Washington because I think it’s one of the shows we don’t want to do without.”

“I think it was a super exciting class,” Show President Lowell said. “I’m just awed by these riders and what they’re able to do and these horses. I think we had fantastic crowds. The enthusiasm here is building. There were a ton of people here and a lot of buzz, and I think it shows how much D.C. loves equestrian sport. I can’t wait for 2020.”

For her two wins earlier in the week, Sydney Shulman, riding for Israel, won the $10,000 Leading Under 25 Award and the Leading Foreign Rider Award.

Beezie Madden continues to hold a commanding lead in the east coast sub league standings of the North American League with 48 points, but the standings shifted below her. Welles moved into second with 26 points and Devin Ryan is third with 21 points. 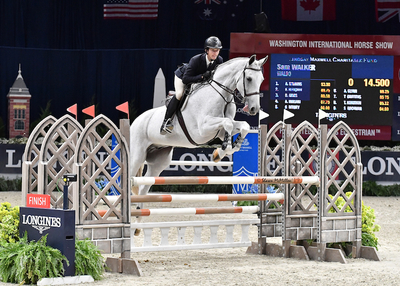 A field of 40 started the competitive, year-end equitation final over two days, starting with a hunter phase on Friday, then a jumper phase on Saturday afternoon, and then 10 riders qualified for a final work-off held Saturday night.

Riders’ average scores from the first two rounds were combined, with the 10 top-ranked competitors then changing horses in the work-off, and the highest combined total score won the class.

“I was 10th here last year and third the year before, so I was a little bit hungry to get back in the ring here,” Walker said. “I just wanted to say thank you to the Lindsay Maxwell Charitable Fund for sponsoring this class and always making it a great event every year.”

Walker set the tone early as the judges, Chance Arakelian, Laura Kraut, Timmy Kees and Sue Ashe, scored him with 93 in the hunter round, giving him the win in that phase.

In the jumper round, Walker finished second with a score of 92, but retained his lead in the overall standings with a 185 total.

Walker and Stearns both train with Clark, John Brennan, and their team at North Run, so they were familiar with each other’s horses.

“I think that knowing the person in your barn whose horse you’re swapping onto and seeing the horse every day is a big advantage,” Stearns said. “I watch Waldo go all the time, and Sam watches mine. I know that Sam has my best interests at heart, as I do for him, and he’s going to tell me what I need to know. They’re both such top-notch horses that you really couldn’t go wrong.”

Stearns put the pressure on Walker with a solid round with Waldo.

It was a bit of redemption, as the year before, she had also switched horses with Walker and did not have as good a round, leaving her in ninth in the class.

Walker answered her challenge with a great round of his own as the last to go, giving him a 93 while Stearns had an 86.5 in the work-off, giving the win to Walker with a 278 total score and putting her in second place with a score of 269.5.

“When the scores get as good as they got at the end, that’s so much fun to watch, and it’s a pleasure to judge,” said Kees.

“I’ve been very, very grateful to have the ride on the same horse each year,” said Walker. “I always look forward to coming to this horse show. It’s extremely well organized. It’s a great atmosphere. It’s a real show. In regard to my horse and preparation, we just kept it simple and tried to stick with the plan. I’m just really happy with how today went.”

Walker has had the ride on Waldo for three years, while Stearns, of Chilmark, MA, has just been showing Acer K since March.

“These two are so well schooled, and in the whole scheme of things, veterans of equitation,” Clark said of the two riders. “I’m so proud of them. Ava’s horse is only8 years old; this was his first year doing equitation finals, and Sam has helped develop Waldo, another horse that we also own. Waldo had never done equitation at this level until Sam started with him. It’s been fun working with both kids and both those horses.”

“I’m a big fan of Sam’s,” said judge Arakelian. “I think he rides so forward and light with a great hand. Sam, your third round was absolutely beautiful. Ava, your second round was unbelievable as well. You’re a very strong rider, and you ride that horse beautifully.”

Finishing in third with a total score of was Dominic Gibbs, 16, of Colorado Springs, Colo., on Cent 15, who trains with Stacia Madden and the Beacon Hill team.