Hunter Champey and Dorli Burke are winners in Harrisburg 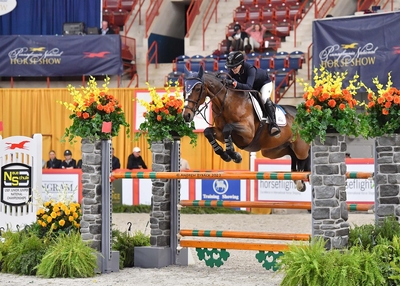 Sixth to try the 8-effort jump-off course, Champey moved into the lead with a clean ride in 30.810 seconds.

The remaining four entries failed to beat her score with the closest being Mimi Gochman of New York, N.Y., who rode SFS Harriet to a clean trip in 31.190 seconds to place second place.

"Hill Top is just the bravest horse," said Champey. "He really tries his heart out for me. I did make a few mistakes along the way, but he held all the jumps up, and I couldn't be more grateful for such an amazing horse.

"My plan for the jump-off was just to stay neat, not more galloping," Champey said. "It was a good plan because he needs a little more room at the verticals. Then it was just neat everywhere else."

Champey, who trains with Alex Inganamort and Elinor Kunsman, has been competing at Harrisburg since she was 8 or 9, doing small ponies.

"I've grown to this level doing the low juniors, and I owe a lot to my trainers who push me along the way," saod Champey. "Hill Top is the horse I never thought I could have. He's taken me to my first Nations Cup, my first Young Riders, and now my first win in Harrisburg. He's just amazing, helping me feel much more confident in my ride. I love him."

DORLI BURKE of Salisbury, Md., riding Classic, was a  first time champions in Harrisburg, winning the Amateur Owner Hunter 3'3", Riders 36 and Over Championship with a total of 34.5 points. 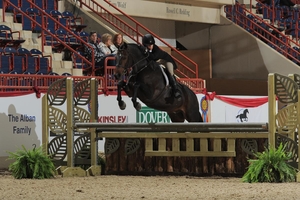 Dorli Burke on Classic (Photo by Al Cook Photography)"Honestly, I get nervous and I just have to say, 'Okay, just get your rhythm, keep him in front of you, and whatever happens happens,'" Burke said. "When I concentrate too much on results I always make a mistake. I was thinking about the championship but trying not to."

"I just love him," Burke said of her 11-year-old Warmblood. "You get him in his little pace and just point him at the jumps, and he's like, 'Okay Mom!' He's just a really good guy, and the team at Rolling Acres has been fantastic. The whole thing is just positive and has been really, really fun."

With her championship, Burke qualified for the $25,000 3'3" & 3'6" Amateur Owner Hunter Classic that opened Grand Prix Saturday for the final day of the Pennsylvania National Horse Show.

Seventeen riders who previously placed in the top four of an Amateur Owner Hunter over-fences class qualified for the class.

Scores in the $25,000 Classic were based on two rounds, with the top 12 horses returning for the second round. 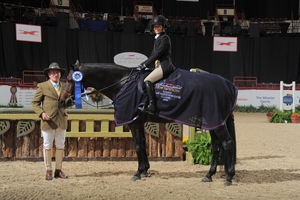 Dorli Burke (Photo by Al Cook Photoraphy)"I don't normally do classics because I don't want to give my horses the extra work," Burke said. "It's such a special horse show and my horse loves the ring, and the horse show made the effort to do this for the amateur riders. I really felt that if we qualified we shoulate. I think the show was really nice to do this for the exhibitors."

Burke was in third place after the Classic's initial round with a score of 87and as the only one to score 90 in the second round, she was unbeatable with a total score of 177.

"He's got a really wonderful rhythm, but I'm small and so I just wanted to keep him going enough that he didn't think we were finished," Burke said. "I was really just trying to get him ahead of me. He's really fun to ride."

"I'd had such a fun week here that it was all just more fun," Burke said. "If we messed up, we messed up. He's not used to me showing three days in a row. It was fun and good practice for us to go in for a second round. I really enjoyed it."