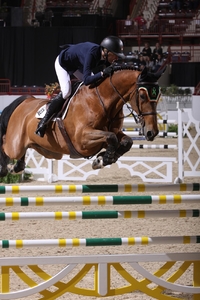 Her sharp turns and speedy footwork on Abigail Wexner's Coach posted a time of 34.93 seconds, and onlookers wondered how it might be matched.

Then the following three riders beat Madden's time, but only barely.

The top four finishing places were separated by a mere 0.87 seconds.

Immediately following Madden's round, Cawley was quick in the turns and hunted down the final line to finish in 34.06 seconds.

"At the last part of the jump-off, I threw style right on out the window and went for the 'Hail Mary' pony-kicking," said Cawley, who had watched Madden's round and was determined to beat it. "It was a little terrifying from where I was sitting, I'm not going to lie, but Adamo was right there with me. He was good."

CAWLEY HAD briefly campaigned the now 14-year-old Royal Dutch Warmblood in 2017 and partnered with him again last April.

"We've just been getting back in sync," she said. "We've had some hills and valleys. He was amazing in Spruce Meadows in both five-star grand prix the last two weeks. Inside is maybe not his best venue; I think he prefers a big grass field. I was proud of him tonight. He really stepped up to the plate even when it wasn't pretty. He kept fighting for it."

With faults occurring most often at the two combinations, fences 4ab and 10abc, only six riders returned for the 8-effort jump-off, including Sharn Wordley and Caitlyn Connors in addition to those already mentioned.

Mändli had not seen the previous riders jump-off.

"Obviously Beezie is a very fast rider, and then I heard Molly was even faster so I thought I had to try everything to beat it," said Mändli. "I planned five strides to the last line, but it just wasn't there." 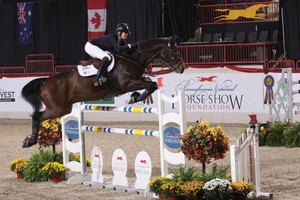 Amy Millar on Truman (Photo by Al Cook Photography)Millar and Truman started strong, but tripped on the landing side of the second obstacle.

"I think that trip wasted a little bit of time," Millar said. "If he hadn't tripped there, I could have done one less to the next combination and that would have helped."

Knowing what it would take to beat the leading time, Millar wasn't sure she was going to attempt the two tightest inside turns.

"I didn't want to be a defeatist but...," she said. "Then my horse was just jumping so well and he came out of the double right. We had a similar turn on Thursday night, and it did not work out for me. When I did it on Thursday I said I've got to figure out how to do this, I've got to learn. So I was really happy that we figured it out and we got it right. I'm happy to be third, especially to these two." 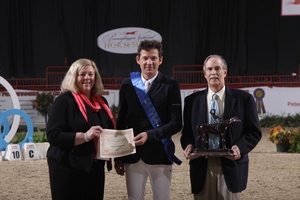