HARRISBURG, Pa--A top hunter rider for many years, and one of the most admired and universally liked, Betty Oare of Warrenton, Va., won yet another championship, this one with Sidenote in the $12,500 North American League Adult Hunter Final at the Pennsylvania National Horse Show on Oct. 14. 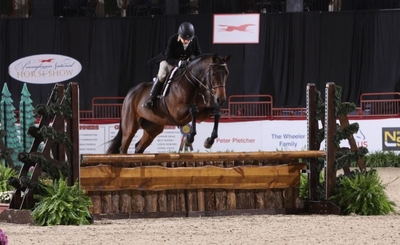 Betty Oare on Sidenote (Photo by Al Cook Photography)Sidenote, whose barn name is Ted, went straight to the top of the leaderboard in the first round with a score of 86.

Enjoying the moment, and the crowd of friends surrounding the in-gate, Oare and Ted galloped around the ring in the final test leaving nothing to chance.

Their second and final score of 89.00 confirmed them as the North American League Adult Hunter Final Champion.

"I think NAL is a wonderful organization and to have a nice class in today's Adult, it was a darn good class," said Oare. "Most that came back were in the 80's, lots of quality. People aim for that high score, it's not just the 'here comes the adults' class."

"This horse has given me a lot of confidence to jump. I'm just lucky to have him," said Oare. 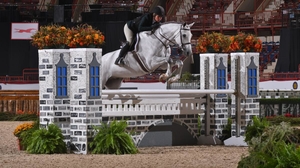 Riding Stephanie Bulger's Moonshot through a near-clean sweep of the division, Ferrell won the championship with a total of 36 points.

"In all fairness to Moonshot, he gives Hemingway a run for his money," Ferrell said. "Unfortunately, Hemingway is not here this year. Moonshot kind of stepped up, was champion last week at Capital Challenge and was champion here, and so he really went beyond my expectations of him taking up the slack while Hemingway was out."

Moonshot also earned the highest score so far at this year's show with a 92.00 in his final over-fences round, as well as the title of Grand Green Hunter Champion and the Kimberton Hill Challenge Trophy.

"It's been exciting," Ferrell said. "Fellow professionals have been very supportive and complimentary these past two weeks, and he's really knocked everybody's socks off. It's nice when your competitors come up to you and say, 'Look, you guys did a really good job, it was amazing and well-deserved.' It almost makes you feel like you really did go beautifully because obviously we're all partial to our own horse." 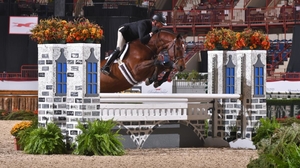 Scott Stewart on Critics Choice (Photo by Al Cook Photography) Taking home the Green Hunter 3'6" Championship  with a total of 24 points was Critics' Choice, ridden by Scott Stewart of Flemington, N.J., and owned by Bikoff Equestrian.

Stewart then returned to the ring for his second High Performance Hunter Championship aboard Betsee Parker's Cameo, earning a total of 27 points for a repeat performance of their 2017 win. 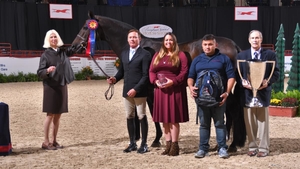 "When he's in the ring, I enjoy showing him because you can count on him," Stewart said. "He'll always jump. He doesn't spook. He's a little bit funny to get going but once he's in the groove, especially in the four-foot, he gives you a lot of confidence. You just have to tell him to keep going."