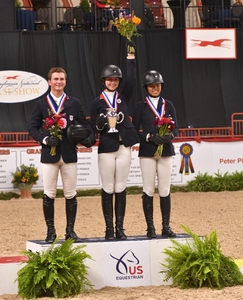 Having won the Show Jumping Talent Search Finals - West in September, 17-year-old Reichow ended the year and her Junior career as the  Individual Champion on her own 9-year-old KWPN mare.

Cunniffe, 18 of South Salem, N.Y., in his last year as a junior, rode Buckle Up to tie with Gochman of New York, N.Y., on Street Hassle BH, after the three phases, the speed class Thursday, the two round Pris des States Friday and the Individual, both with nine faults.

"I had the second fence down in the speed class," said Cunniffe, who, along with Gochman, contributed two clean rounds in Zone 2's winning effort in the Prix des States.

"WE GOT Buckle Up in the middle of Florida last year," said Cunniffe. "It was hard at first, because I had never ridden a horse like him. He was just a different sort of ride, but now I've figured him out."

"I'm going to college next year, and will ride between breaks and hopefully get down to Florida," said Cunniffe.

He said the decision of whether to turn pro would be made with his parents and would depend on how he does in the next couple of years.

Cunniffe jumped off with Gochman to determine the silver and bronze medals.

Cunniffe, going first in the jump-off, was quick and clear round for a final score of nine penalty points, while  Gochman had a rail early in the jump-off to finish third

"I'M VERY thankful to have such an amazing horse," said Reichow of Forever Alve. "It's been an incredible year, It definitely has been the best year of my life. I'll never forget it. With the Talent Search and now this, I didn't expect this to happen, I'm over the moon."

This was Reichow's last year as a junior.

The final course, designed by Ken Krome of Westminster, Md., featured 11 jumps with 14 jumping efforts at 1.35m with a time allowed of 69 seconds.

She only had one rail in Phase II to remain in the top three heading into the final phase, where she had a double clear round and ended the weekend on a final score of four penalty points.

"It's such an honor and such a prestigious class, and I don't think someone from Zone 10 has won it in a couple years, and I'm truly honored I was able to do that this year," said Reichow. "It has always been a goal of mine to come here and do well."