DEVON, Pa.--Hannah Irons, 19, of Queenstown, Md., and Scola Bella, by Scolari out of Walona, a 10-year-old Hanoverian, put in an impressive performance to win the Young Riders Freestyle classon Sept. 28 at Dressage at Devon. 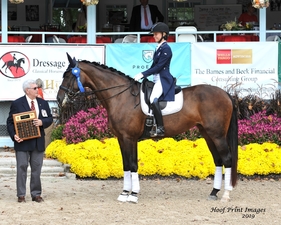 Hannah IronsIrons won with a score of 73.485, a personal best.

She was a member of the Region 1 North American Young Rider Dressage Team that claimed the championship in August.

Irons has been riding Scola Bella, a.k.a. Bella or Queen Bella, for two years.

Irons is grateful for being able to lease Bella courtesy of Dressage4Kids, an organization dedicated to encouraging riders under 21 to become true horsemen.

In 2018, after Bella sustained injuries and required time off, Irons learned that she had to be flexible in her goals.

Instead of showing, Irons used the year to shore up their relationship and build the trust so essential to enhancing performance, especially in the show ring.

“SHE HAS to trust you," said Irons. "You have to have a strong connection with her before you ask for more expression.”

Irons is proud of what Bella accomplished at Devon, demonstrating the same level of performance they have at home.

That’s challenging in any show environment, especially one as electric as Devon.

“It’s my favorite show,” says Irons. “There’s a community feeling. The crowd knows the sport and enjoys it.”

Plus, as a bonus, her grandparents came along with her mother to cheer her on.

Young riders and youngsters dominated the showgrounds on Sunday, the final day of Dressage at Devon.

From the well-attended Blessing of the Animals, led by Father Larry McCormick, to young children excitedly riding their newly made stick horses down the center line of the Dixon Oval, to children posing with Marky the Unicorn, to the Young Rider’s Freestyle, future dressage stars were everywhere you looked, often with proud parents looking on.

The DCIU25 Grand Prix Freestyle was won by Tanya Strasser-Shostak , a daughter of top rider Evi Strasser, on Renaissance Tyme, a 16-year-old Oldenburg by Royal Diamant out of Valencia, another familiar name in the world of dressage and, of course, at Dressage at Devon.

CANADIAN Olympic dressage rider Jacqueline Brooks won the FEI CDI3* Grand Prix Special on Westwood 5, by Wolkenstein II out of Lindenbluete, a 12-year old Hanoverian with a score of 68.426 on Saturday.

To Dressage at Devon fans, Jacquie Brooks is a familiar face.

To the spectators’ delight, she returns frequently.

“Devon is my favorite. Look at it,” she said. “The townspeople coming out to support it. Last night, people were coming out from town who had never seen a horse, and they were asking for autographs.”

Brooks started competing with Westwood, a 12-year-old Hanoverian early in 2019.

She describes him as a calm, quiet, cuddly horse who finds all his work equally easy.

“To have a horse that can do all the movements of the Grand Prix is rare,” she said. “Usually, they have one movement that’s more difficult for them.”

When comparing him to D Niro, a.k.a. “Goose,” the Swedish warmblood gelding that she retired at the end of 2018, she said, “They are unusually similar horses. Both are big and strong, which I like, and they’re very strong in the contact.”

Westwood, however, is taller, a slightly more elegant mover and a little more emotionally fragile than D Niro.

He loves being in the ring and doing his job, but if Westwood tries too hard, he can become overly sensitive, so Brooks approaches his training slowly and steadily.

She hopes to move from steady 68s to 70s, stepping up their scores in small, manageable increments.

Sh said that part of the challenge in bringing a horse along in North America is that there are not many venues like the Devon Horse Showgrounds.

“You may have the opportunity five times a year to come into a venue like this," said Brooks.

She explained that at many other venues, the show and the stay at the grounds is much longer so the experience is very different.