DEVON, Pa--Canadians ruled at Dressage at Devon on Saturday, Sept. 28, winning all three of the biggest classes. 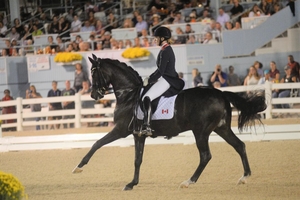 Just a few weeks after winning the Saugerties World Cup Freestyle in only their second Big Tour Competition, Lindsay Kellock and her mount Sebastien, by Sandro Hit out of Feirie Dame, a 13 year-old Rhienlander, won the Grand Prix Freestyle CDIW.

Kellock and Sebastien scored a personal best of 75.870.

Lindsay Kellock made her Canadian Dressage Team debut at the young age of 22, representing the maple leaf in the 2013 CDIO 3* FEI Nations Cup in Wellington, Fla., riding Hunter Douglas Rhapsody.

After taking a short break from competition, she returned to the ring stronger than ever.

PARTNERED with Royal Prinz, Kellock earned a string of top-three finishes at prestigious competitions including wins at the 2016 CDI 1* in Tryon, N.C., the 2016 CDI 3* in Saugerties, NY, and the 2017 CDI 1* at the Adequan Global Dressage Festival in Wellington. 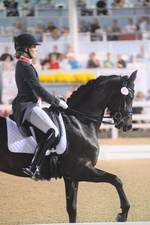 Lindsay (Photo by Alix Coleman)KellockKellock returned to the Nations Cup ring in 2019 with Floratina, where Team Canada’s silver medal finish was greatly bolstered by the pair’s consistency.

Since Kellock picked up the ride on Floratina in 2019, the combination has scored above 70 percent on every single test performed at the FEI level.

Kellock's Mother was a dressage rider and managed Sunnybrook Stables in Toronto, and Kellock started riding at age six

She ski raced before dressage and enjoys running.

She traveled as groom for Jacqueline Brooks and Gran Gesto at the Beijing 2008 Olympic Games in Hong Kong. and worked as assistant trainer and barn manager for Ashley Holzer for seven years…

Brittany Fraser-Beaulieu on All In, by Tango out of Leontine, a 14 year-old KWPN, placed second with a score of 74.945, and James Koford on Adiah, by Nico out of Marije Ant, a 12 year-old Fresian Cross mare, moved into third place with a score of 72.855.

Canadian Brooks, who Kellock worked for in 2008, took top honors in the FEI CDI3* Grand Prix Special on Westwood 5, by Wolkenstein II out of Lindenbluete, a 12-year old Hanoverian with a score of 68.426. 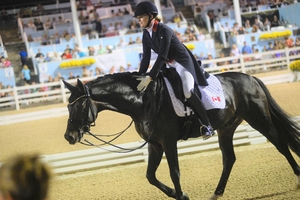 Lindsay Kellock leaving the ring after her Freestyle test (Photo by Alix Coleman)The second place winner was Jessica Jo Tate, on Faberge, by Floristan out of Baroness, a 16-year old Westphalian, with a score of 65.808, and in third place was Michael Pineo on Farrington, by Jazz out of Belaluss, a 9-year-old KWPN with a score of 63.787.

The FEI Young Rider Grand Prix 16-25 CDI won by Vanessa Creech-Terauds, also from Canada, the daughter of Diane Creech, on Hallmark, by His Highness out of Lapislazuly, with a score of 66.744.

QREDIT HILLTOP, who was a Grand Champion in the Breeding division 10 years ago, returned this year to compete in the Grand Prix

In 2009, a yearling colt Perfect Qredit, by Quaterback out of Dream Rubina, became the Grand Champion in the Devon Breed show.

This year he returned as an 11-year old stallion under the name Qredit Hilltop.

Back in 2009, Michelle, who was an air-traffic controller in Afghanistan, owned the colt and boarded him at Hilltop Farm in northern Maryland.

When Hilltop Farm bought Qredit, Michael Bragdell, Hilltop’s training director, started him under saddle, and he has been working with Qredit ever since.

Dressage at Devon is his first big CDI show.

In the Grand Prix Freestyle CDIW at Devon, Qredit came in sixth with a score of 69.185.

With a broad smile across his face, Bragdell says, “He’s quirky. I love him.”

Now Bragdell says Qredit is more confident than ever, he knows all the moves, and the next step is to add “more expression.”