UNIONVILLE, Pa--The cross country phase on Sunday, Sept. 22 at the Plantation Field CCI 4* turned the results after the dressage and show jumping almost upside down. 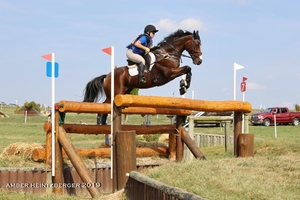 Colleen Rutledge on Covert Rights (Photo by Amber Heintzberger)Only two riders maintained a steady position through the three phases; the winner Colleen Rutledge of Frederick, Md., on Covert Rights, who was first after dressage, dropped to third with a rail down Saturday in show jumping and moved back up to win on Sunday with one of only three rounds with no time penalties over Mike Etherington-Smith’s cross-country course to finish on 30.30; and Jennie Brannigan of Kennett Square, Pa., on Stella Artois, tied for seventh after dressage, fifth with just .4 time faults in show jumping and fifth after cross country with 10.8 time penalties to finish on 41.80.

Erin Sylvester of Cochranville, Pa., on Paddy the Caddy, the leader after show jumping, had a run out at the second of the brush angled fences for 20 faults but still managed to make the time, dropped to 11th, while Caroline Martin of Riegelsville, Pa., on Danger Mouse, second after show jumping, had a fall at the offset houses at fence 16 that eliminated her and resulted in a broken collarbone.

BOYD MARTIN on Bonito also fell at fence 16, and while he is fine, he had previously withdrawn fourth placed Z that he was riding for Phillip Dutton because Dutton is fit to ride again after being injured in a polo game the week before.

Will Faudree of Hoffman, N.C., on Michel 233 , tied for 15th after dressage and ninth after show jumping, jumped up to second with a double clear cross country, no jumping and no time faults.

Fylicia Barr of West Chester, Pa., on Galloway Sunrise, bought for $500 from Craigslist, finished third after being tied for fifth after dressage, dropping to 12th with a rail in jumping and having just 3.20 time penalties cross country to finish on 37.70

Meghan O'Donoghue of Purcellville, Va., on Palm Crescent moved from tied for 21st to tied for 10th to fourth with just 5.6 time penalties cross country to finish on 39.90.

Erica Nesler of Cochranville, Pa., on Right Above It moved from 17th to 20th with a dropped rail and then jumped up to sixth with only 5.6 time penalties cross country to finish on 43.10.

Nesler said she's aiming for the 4* at Fair Hill, so had to keep slowing down Right Above It on cross county to save him for that event.

Brannigan also finished seventh and eighth on FE  Lifestyle and Twilightslastgleam after starting 38th on Lifestyle and 24th on Twilight after dressage to finish on 434.80 and 47.00 respectively.

“He was a rockstar,” Rutledge said about her cross country ride.. “For a very long time he did it because I asked him to, now he does it because he loves it. He felt so good today that a trained monkey could have pulled him by his tail and he still would have jumped the things.

"He 100 percent saved me when I asked him to do things that were completely inappropriate and absolutely ridiculous. At fence 6, I saw a wide open distance, but he decided adding up and not landing in the middle of the fence was a better idea. He just went, ‘You know what? I get it. This is why you pay me. Nope, we’re going to do it my way.’ As long as you go in the direction I want, everybody’s happy."

“He is a deceivingly large-strided horse who will shorten at the drop of a hat," said Rutledge. "I can have a 24-foot stride and I can have a 4-foot stride, which makes him incredibly quick and easy. Not only that, because I’ve taught him from a very young age that when I say go, it means go. He's a homebred, he's one of my children.

Many in the 4* were using Plantation Field as a run-up to the 4* at Fair Hill in October, including Rutledge.

“Yes, I know I was in the hunt and yes, I know this is a win, but it’s actually a fitness run for me,” she said. “I wasn’t going, ‘Oh my god, I’ve got to make the time to win,’ I was actually going, ‘I need to see where his fitness level is today’.  This is why I come here, because we have hills and terrain to gallop on, they try to make it the best that they can. There were enough questions that it kept his interest. I wanted to know his mental  fitness and his physical fitness. I’m happy with what I did this weekend.”

Faudree on the 9-year-old Michel 233 was the only pair to finish on their dressage score of 33.4.

I got him as a 6-year-old in England," said Faudree. "As a 5-year-old, “Mikey” won the Bundeschampionat in Germany, and did nothing for a year before I got him. He was quite big and gangly, but I loved his brain so I got him the end of his 6-year-old year.”

“I did a season of Preliminary and then did Intermediate, and he did the CCI2* at Fair Hill as a 7-year-old. He was good but he was weak and so I spent his whole 8-year-old year at the Intermediate level and went back to Fair Hill last fall, and he finished third in the CCI2*. I often describe him, he’s a bit like riding three men in a horse costume – sometimes they’re not all facing the same direction, but they all get along.”

“He’s the favorite of all the girls in the barn,” Faudree said. “He doesn’t really like dogs, but he’s really sweet, really personable. But he’s a little bit of an introvert and he just is a little introverted at times, definitely needs his quiet time. He’s a horse that you can never tell him he’s doing something wrong, you can only ever show him how to do things right and if you tell him off he gets his feelings hurt so quickly. He can be a little emotional but there’s not a malice bone in his body. He just is kind of his reserved self, but he has this really special bond with me and the girls that take care of him. I’m very lucky with the team that I have.”

“It was a personal best in the dressage for him here, and there’s massive room for improvement and he’s only going to get better," said Faudree. "Show jumping, I’ve had clear rounds at this level before but I have to say this, this round he probably jumped the best within himself. All three of his men in his costume were all going in the right direction. And then cross-country my plan was to go quick. Plantation Field did a phenomenal job with the hand they were dealt with the footing. I rode four horses around and not one horse pulled up with stingy feet. They aerated in all the right places so huge thanks to them. It can’t be stressed enough how important that is for the horses.”

Barr said her mother found Galloway Sunrise on Craigslist for $500 dollars when the mare was just a baby.

“She’s awesome,” Barr said. “She put in her best dressage test to date and show jumped well. Today I think they did such a good job of making the ground rideable – we were all a little worried coming in about it being concrete and they really did a wonderful job.”

“She’s experienced at this level now, so I wasn’t worried about any of the questions, but knew that they were hard enough where I’d have to really ride," said Barr of the cross country course. "I was mostly concerned about giving her a clean, fast ride. She’s just a great horse. If she sees the question, she’s going to try with everything she has to do a good job.”

"This is always my favorite event," said Barr. "My place is near, on Newark Road."

Barr is also planning to compete at Fair Hill in the CCI4*-L next month.

“We feel really lucky to have two top-quality events right here,” she said. “I’m excited to see what they’ll do next year at Fair Hill.”

Colleen Leach on FE Golden Eye on the 2* A section ovwe Luren Kieffer on Get Gaudi and Ken Martin on D.A. Lifetime, and Michael Pendelton, who is an assistant rider to Martin at Windurra, placed first, second and third on Contaro, Mis LaLa Herself and Wabanaki in section B.