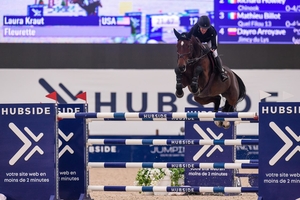 Laura Kraut (Photo by Filippo Gabutti.)One of only four clean in the nine horse jump-off from a starting field of 50, Kraut finished in 37.81 to beat Nicolas Delmotte on Urvoso du Roch, who finished in 38.03.

“I’m thrilled by this win," said Kraut. "Fleurette was absolutely perfect. It’s only our third jump-off together, but she’s amazing. I don’t know where I managed to save time. Fleurette is naturally fast, and she turned really well, and then she came up with the goods in the last long gallop. To be honest, I didn’t even watch the other jump-off riders. I just closed my eyes and hoped.”

This is how the course designed by Italy’s Uliano Vezzani for the Grand Prix could be described.

And rightly so, as only nine of the 50 horse and rider combinations competing in this 1.55m class managed to jump clear in the first round and qualify for the jump-off.

This second round, which was full of twists and turns, was won in the end by Kraut.

Many riders had four faults, 14 to be precise, among the champions taking part in the key class of the competition in Grimaud, the Hubside Grand Prix.

Rails were knocked down all over the track, but in particular on the last elements of the course, keeping the public and the riders’ friends and families on tenterhooks until the final seconds.

Neither the 2014 individual and team silver medalist Patrice Delaveau, nor the team gold medalist from the Rio Olympics, Roger-Yves Bost, or the eventing World Champion, Michael Jung, or the recently crowned European Champion, Martin Fuchs, managed to qualify for the jump-off.

Half way through the class, only three horse and rider combinations had left the ring clear to qualify for the jump-off, joined in the second half of the class by six combinations, who were just as promising.

Although Dayro Arroyave preferred not to take part in the final part of the class, the following eight riders fought it out in the ring of the Ecuries du Golfe de Saint-Tropez.

First to go, the winner of Friday’s Grand Prix qualifier, Mathieu Billot, had one down on the Mercedes vertical this time.

Sweden’s Frederik Jonsson and his bay Cold Play, were first to jump double clear, finishing their round in 40.44 seconds.

The young Richard Howley of Ireland, first to finish his round in less than 40 seconds, saw his dreams of a victory disappear on the second fence of the jump-off.

The current World team champion, who was visibly not worried by her many male competitors, gave a stunning performance.

Kraut and Fleurette finished their jump-off with great ease, in 37.81 seconds.

The last four competitors, who set off in hot pursuit, didn’t manage to dethrone the American.

While Kevin Staut and Viking d’La Rousserie had a misunderstanding on the first fence of the jump-off, Robert Whitaker had one down on the last element.

Delmotte and Urvoso du Roch, who were in fine form this weekend, jumped clear but were 22 hundredths of a second slower than the lady champion.

Last to go in the jump-off, Italy’s Paolo Paini, took his time and finished in 43.76 seconds and went into fourth place in the final line-up.

A few seconds before the prize giving ceremony, the champion was obviously delighted by her performance.