SAINT-TROPEZ-France--Jessica Springsteen on RMF Zecilie, the only female in the 14 horse jump-off, won the Global Champions Tour Grand Prix of Ramatuelle in Saint-Tropez on Sept. 14. 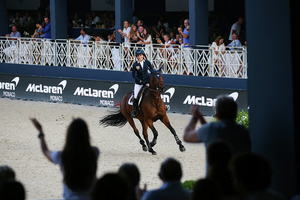 Fourteen jump-off riders, a single lady rider and an amazing victory for the daughter of the Boss.

"RMF Zecilie was literally flying today," said Springsteen. "She jumped exceptionally and I’m delighted, especially for her owners. I was the only woman in the jump-off, but that’s not what counts. Before I went into the ring I just focused on my mare and our combination. Now I can’t wait to ride in the next leg of the circuit in New York, where I’ll competing at home.”

ON THE EVENING of Sept. 14, as part of the sixth edition of the Longines Athina Onassis Horse Show and the 17th leg of the Longines Global Champions Tour, Bruce Springsteen must have been delighted to be the father of the girl who has made a name for herself by winning her first LGCT 5* Grand Prix, a stone’s throw from Pampelonne Beach. 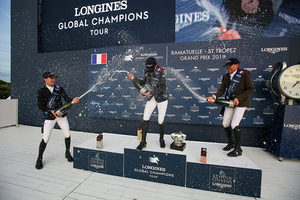 The champage flowed after the Grand PrixHelped by her exceptional RMF Zecilie, whose handiness must have made many green with envy today, the lady rider finished ahead of all the other competitors.

In particular Belgium’s Peter Devos, now the leader of the provisional ranking, who, first to go in the jump-off, jumped double clear and seemed unbeatable.

But the daughter of the Boss shaved a second off the time of the rider who she relegated to second place in the class.

“I knew I had to be in the top 3 today to beat Ben Maher and go into first place," said Devos, whose second in the class makes him now the new leader of the Global Champions Tour provisional ranking. "I gave it my all today.”

Simon Delestre of France, third in the class, said “Hermès Ryan did a fantastic job, but I couldn’t go any faster without taking stupid risks.”

Even the master Marcus Ehning said to the big winner of the day: “You were f****** amazing!”

The sixth edition of the Athina Onassis Horse Show finished in front of grandstands which were full and buzzing, with an American victory and the compliments of the President and founder of the Longines Global Champions Tour and the Global Champions League, Jan Tops: “The Longines Athina Onassis Horse Show is an example for all the shows: every detail is taken into consideration and it’s a pleasure to come here both for the riders and the public.”

And also earlier in the week the team competition was contested.

Riders from various countries join together to make up teams of two, three or four riders or two riders with three horses, only two of which compete in each leg of the Global Champions League, the team circuit.

In this revolutionary team competition, top riders from different countries unite to compete in a high stakes showdown for the 2019 GCL Championship race.

The ground-breaking concept delivers fascinating tactical battles and fierce rivalries in stunning venues around the globe, as teams battle for a place in the all-important GC Playoffs.

Currently , Springsteen and Harry Charles, riding as The Miami Celtics, are fifth in the circuit standings with 281 points behind the leaders, the St. Tropez Pirates consisting of Devos with two horses and Olivier Robert, with 304 points, and Laura Kraut with Jos Verlogy are seventh with 255 points.

The final leg will be in New York. Sept. 27-29 on Governors Island.