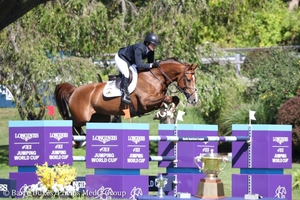 Beezie Madden on GarantHaving won the feature contest twice previously, Sunday’s victory marked Madden’s return to the winner’s circle and the third time her name will be etched into the American Gold Cup trophy.

“I have a young horse here, and he has had a wonderful year," said Madden. "Our plan was to step him up this fall, so I went on Friday, and he went so well that we decided to try him on Sunday. I wasn’t even sure I was doing this class when I came here this week, so for him to come thought like that today is amazing."

“My goal was to have a nice confident ride for my horse and not get him in trouble anywhere," said Madden. "He is an amazing horse and an incredible athlete. I believe in his talents so much that I wasn’t too worried. I tried to keep him quiet all the way around.

“GARANT is an 8-year-old owned by Abigail Wexner," Madden said. "We got him from Willem Greve when he was 6 years old, the fall of his 6-year-old year. We have high hopes for him. He was also the 5-year-old champion in Lanaken, at the FEI World Breeding Jumping Championships, so he is already kind of a winner and a special horse. We are just trying to bring him along really well, and our goal was to give him lots of mileage this summer. He went to Spruce Meadows and he went to Aachen for his second time, actually as he went there last year, too. He has a lot of experience in these field type venues, so I thought this might suit him. He did the summer tour and now he is ready to step up and do some grand prix classes. He exceeded our expectations today.

“He has a tremendous jumping talent which is not everything," said Madden. "He’s incredibly smart. He knows he’s not supposed to hit the fences and he seems to know how to run fast and jump high, and I have no idea why. When we got him, Clark Shipley, who works for us, took care of him, and he also took care of Authentic. He nicknamed this horse ‘Junior’ because – it has nothing to do with the way he looks or the way he jumps – his personality is a lot like Authentic. He is so intelligent and he has so much self-confidence.”

“I would say this was a big step for him," she said. "Our goal is to do some bigger classes and push him a little bit in the fall and then make a decision if he is one to try to shoot for the Tokyo Games next year, but that’s a big ask for a 9-year-old. Our plan is to test him a little this fall and see if we want to aim him for that.”

Alan Wade of Ireland set a 16-effort track set at 1.60m in height to be contested by the 40 entries who had qualified for the competition following their results in Friday’s $75,000 American Gold Cup Qualifier CSI4*, which was won by Shane Sweetnam, riding for Ireland, on Chaqui Z.

Though the 79-second time-allowed eliminated three competitors from the jump-off, seven managed to go clean without time faults, but Nicki Shahinian-Simpson on Akuna Mattata electiedto forego the jump-off to finish seventh. 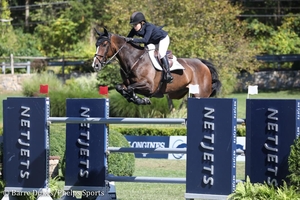 Katie DinanKatie Dinan on Brego R’n B set the pace for the short course with the first double-clean trip of the afternoon in 41.94 seconds.

Third to return following a four fault round by Paul O’Shea, Madden was clean in 40.89 seconds, one second faster than Dinan.

With Madden in the lead, the three final combinations each tried to beat her, but none would prove able to,.

Devin Ryan and Eddie Blue turned in the swiftest ride in 39.87 secondsbut had four faults.

Last to go, Karl Cook on Caillou had the second-best jump-off time, finishing in 41.25 seconds to place second, while Dinan and Brego R’n B’s time held for third.

"My day was great, and I was super happy with it," said Cook. "It was my first time here, and it feels really good. I love riding on the field because it is big and open, and my horse thrives on that ride and this type of course. It was great and I am so happy that I came and being second to Beezie, it’s not really like I am second.” 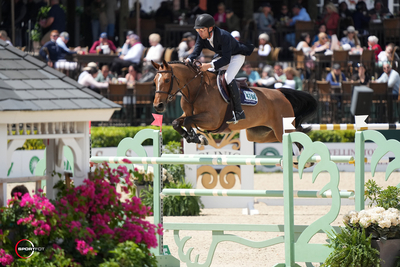 Karl Cook“We will see with this horse, if we qualify, if we end up going to the World Cup Final," said Cook. "Because the World Cup Finals is in Las Vegas is a different animal, but we will make that decision later. I came out here because it fit in my schedule and also my wife Kaley Cuoco was working in New York this week so she would be here. It was great.”

“I think what I am happiest about out there with the slope of the arena is that it adds a completely different element," said Cook. "It adds an amplified element to the riding because you have a slope going uphill or downhill, and Alan Wade does a great job dealing with that so he doesn’t trap people. When you go downhill and you have a turn it changes how you approach that turn which is super interesting and it’s fun to have another element to work on.”

“I was thrilled with my horse today," said Dinan. "I jumped him here in the spring shows in May, and it was our first time jumping the grand prix together, and he was second out of the big grand prix in the spring, so I had a really good feeling about coming here for Gold Cup.”

“My family lives five minutes away from this horse show, and Old Salem is where I did my first horse show ever, so I always work it into my schedule," said Dinan. "I think it’s wonderful that the Gold Cup has been at Old Salem for the last few years, and it’s done a great thing for this place and the event. I’m always super happy to be here and to be at the press conference with Karl and Beezie, a personal hero of mine, is always a treat.”

MADDEN'S win upped her recent collection of high-profile victories by one, adding to a growing list of impressive performances in only the past few months.

Just one week ago, on Sept. 8, Madden rode Darry Lou to a stunning performance that beat the elite field in the $3 Million CP ‘International’ Grand Pri, at the Spruce Meadows ‘Masters’ CSIO5*, one of only four Rolex Grand Slam of Show Jumping events.

In July, Madden won the Sparkassen-Youngsters-Cup at CHIO Aachen with Garant.

Massen has now won the event three times at the American Gold Cup, with the first two coming in 1989 and 2010. I

Having consistently earned the best results to accrue the most points in competitions offering $25,000 or more in prize money throughout the course of the week, Shane Sweetnam was awarded the  $15,000 Leading Rider Bonus following the conclusion of Sunday’s activities.

The Style of Riding Award was given to Lucy Deslauriers.

The American Gold Cup served as one of only seven events that make up the East Coast division of the Jumping World Cup North American League.

Riders compete in the league at events all across North America in order to qualify for the prestigious Jumping World Cup Final, which will be held in Las Vegas, Nevada, from April 15-19, 2020.

“Since I started doing grand prix classes, the American Gold Cup has been part of the circuit, and it is amazing how it has been so special at so many different venues," said Madden. "It doesn’t seem to matter particularly where it is, it is always a special event. If you’re here it is really beautiful and also a great location for this time of year as far as scheduling and where everybody is. It’s an honor to be a part of it and to have won it more than one time. We really love being here.

“The weather was a lot better than last year," said Matt Morrissey, Assistant Show Manager of Morrissey Management Group. "We showed every day on the field this week. We had great results today, and Alan always does an amazing job course designing here for us. We had good competition. Beezie wins her third Gold Cup, so it is great!” 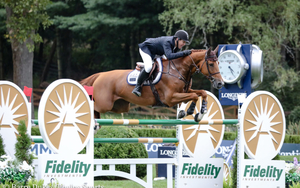 McLain Ward on Franka Trichta A total of 52 challengers entered the class, but hometown hero  Ward, ridinf Franka Trichta won with a clean jump-off round in 35.74.

Adrienne Sternlicht on Toulago, trained by Ward, finished second in 36.37, and Ward was also third on Rapidash, finishing in 38.89.

From nearby Brewster, N.Y., Ward is a frequent sight at the American Gold Cup, and he has an impressive record while competing at Old Salem Farm.

“Franka Trichta and Rapidash are both 9-year-old horses, and they are great horses, but a little bit inexperienced," said Ward. "My plan with Rapidash was to be neat and quick and do the numbers. He has a very big stride to put just enough pressure on the other riders. My student Adrienne on a great experienced Toulago went in and blew me away, so I ended up doing the same numbers with Franka Tritcha. She’s a little bit faster horse and not quite as big of a stride, so I was able to keep coming forward and try to tighten everything up a bit.”

Franka Trichta is very new, this is only the second show we’ve had her at," said Ward. "I own her with Susan Heller, who has been a great supporter of mine, and Ashford Farm out of Belgium. They produced the horse and did an incredible job. Our first show was the Hampton Classic where she actually almost won the Saturday grand prix other than a little bit of bad luck slipping and then came right back here two weeks later to win this class. She’s a really exciting horse for the future, and we’re really excited to work and have her for the sport.”

“It’s always brilliant to sleep in your own bed," said Ward. "We don’t get to be home quite as much as we would like, and this is an incredible part of the world that we call home. It’s also a really fun week for us because we have a bunch of friends staying at the house and the event is spectacular. It’s a beautiful field and the Gold Cup is an iconic event, and it’s been top class show jumping all week.”