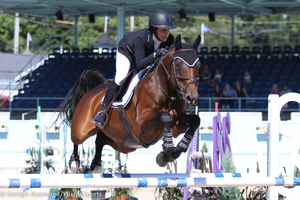 Leslie Shillat on SLF DestinyShillat had the fastest double clear round of the day on a day of six Zone 2 Championships.

Steve Stephen’s course included 12 obstacles, with delicate verticals and a number of rollback turns, and five riders made it to the jump-off.

A Devon local, Schillat won as last in the order of go.

With her previous competitors putting in clear rounds and times that continued to shave off seconds, the pressure was on.

“I HAVE HAD SLF Destiny for two and a half years now," said Shillat. "I got her in Canada and started doing the Adult Jumpers with her. We did that for a year and a half and went to the finals for it. We figured we would just try to move up to the Amateur-Owners and she has been brilliant. We never expected it.”

“The lines were tough, with some of them being very steady, some with lots of options and a lot of bending lines," with Shillat. "We did what we thought would be best for Destiny and shaped lines where we could. Steve made us work, and she rose to the occasion. The time allowed was tight so we had to plan to be tight on all of the corners. We really had to be smooth, neat and get the numbers. It worked out."

In the jump-off, we had planned on leaving out a stride in the first line. Because there were a lot of lines in the jump-off they were really your only place to make some time up. To the last line, I took a stride out, and I think that is where I made up the time. It felt good, so I went for it and it worked. I would have been disappointed if I didn’t do it.

“I live 15 minutes away," said Shillat. I" grew up in this area and my dad used to bring me here as a kid to do the ponies. We qualified for the Adult Jumpers here last year but division is not offered at Devon in the Spring, so to have this show and to be able to come here and do this is such a good opportunity. When they announced the show was coming back this year I knew we had to go. I put this show on the calendar in January because I couldn’t wait to come. I hope they keep this up because it is just such a great opportunity and to have a blue ribbon is just overwhelming.”

Kendra Sue Walmer on Printings Pola Z was Reserve Champion, finishing on a time of 35.877 seconds.

Shelby Bently and her own Lucky Penny was Champion, while Misty Linaberry and her own Celestine picked up reserve championship.

Third in the lineup was the $3,000 High Adult Amateur Jumper Zone 2 Championship, won by Sarah Wood on Neal Shapiro’s Corozano  while Emily Throop and her own Capitalist was reserve champion.

Mark Leone and Redfield Farm’s Exite won the $5,000 Low Junior Jumper Zone 2  Championship, with reserve won by Morgan Webster and her own Excentriek.

After the Devon Fall Classic taking a year off, officials were pleased to see such high numbers of entries throughout the entire week.