DEVON, Pa.--Laura Chapot of Neshanic Station, N.J., won the $25,000 Devon Fall Classic Grand Prix for the second time in a row on Thornhill Kate and for the fourth time in the seven years that the Fall Classic has been held at Devon. 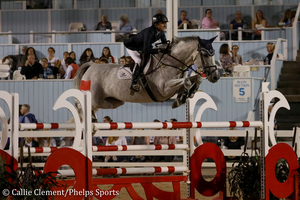 Going sixth out of the 10 that had qualified for the jump-off from the starting field of 33, Chapot was clean in 39.524.

Anne Kursinski of Frenchtown, N.J., a five time Olympian with silver medals from the 1988 Seoul and the 1996 Atlanta Games. riding a new, young horse, UK, went eighth and finished in 40.831 to place second, while Matthias Hollberg, riding for Germany on Southern Command, last to go, finished in 41.324 to place third.

Chapot had three of the 10 in the jump-off, but had the last rail down on Out Of Ireland to finish sixth as the fastest four faulter in 37.937 and eighth on Calafornia, who had a stop and time faults for eight faults.

ALISON ROBITAILLE of Upperville, Va., was fourth on Flairvona, clean in 41.575, and Katia Manuel-Adams of Vincentown, N.J., on  E.R.P. Can WWW.Olland.Biz, the only other clean jump-off round, was fifth in 42.068. 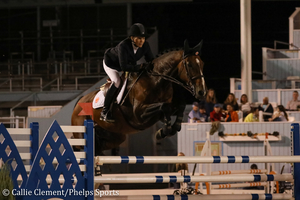 Ann Kursinski and UK (Photo by Callie Clement, Phelps Sports)Course designer Steve Stephens built a technical set of 12 obstacles, which challenged competitors through three combinations and over a liverpool.

Additionally, the final element, a wide oxer at the far end of the arena, caused some issues, with a number of horses making it through the entire course clean before having the final fence down.

“She is just a naturally fast horse, and I just tried to keep her fairly smooth and even the whole way around," said Chapot of Thornhill Kate. "I didn’t change the pace too much. I think I tried to take as neat of a path as I could with her. She kind of gets a little bit stuck on her turns if you get too abrupt with them, so with her I try to keep the rhythm and not interfere too much. I let her think as much as she can around the course otherwise she gets too busy, quick and excited.”

I think Steve did a great job," said Chapot, who also trained the winner of the High Junior,  Amateur Owner Classic earlier in the evening. "It's always a mixed field here with older horses and inexperienced riders up against experienced riders with younger horses that are just coming up. I think he had a nice number in the jump-off, so that it was good for the crowd and a good jump-off.”

“I always love to win at Devon, no matter what," said Chapot. "They put on a great show here, and I am really happy to see it is really well attended here, it shows there is a place for this show and a lot of support for it. Hopefully, this show will continue for many years to come. You don’t compete anywhere else where you get this kind of atmosphere with the crowd and the excitement level. This experience is great for the horses, they tend to really pump up and perform for you here. Any opportunity you have to come here, you have to take it.” 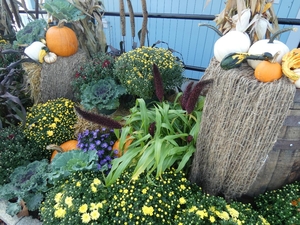 Devon Fall Classic decorations“I thought my horse was great," said Kursinski. "He's only 9, and he'd never jumped under the lights until last night, so I wasn’t sure how he was going to be, and I tried to go as fast as I could. I probably should have done one less stride to the last jump in the jump-off like some other horses did, but my horse jumped the last jump so high in the first round that I got jumped a little loose actually! I probably could have been faster, but he is a green horse, and I thought he was excellent. I am really proud of him."

“UK was bred by Jane Sleeper, an eventer," said Kursinski. "I have helped Jane since the Seoul Olympics, and I helped her with his mother, who was named UN. I have ridden him on and off for her in the last year and a half. I finally thought to just buy him for myself because I love him, and he gets me. He is Irish, but he has a lot of thoroughbred, and I love a thoroughbred type. He gets me and I get him, I just have so much fun riding him. To ride here in the Dixon Oval again on a top horse is really magical.”

“This show is fabulous," she said. "We had a great crowd tonight. The lights, the history and the atmosphere here are so special – there is nothing else like it. There is an educated crowd here – it is like going to Aachen, the spectators get this sport and cheer for the horses. As a rider, you just love that, and the great horses understand that. Some young horses wilt under the atmosphere, but the young ones turn it on to show what they can do, and that is what Devon does for everyone. I agree with Laura, having this show here is so fabulous for young horses and young riders to get in an atmosphere like this and in this arena, there is nothing like this to make horses and riders.”

EMILY DOUGHERTY of Lansdale, Pa. on her own Vivaldi won the $7,500 Show Jumping Hall of Fame High Junior/Amateur-Owner Jumper Classic earlier in the evening. 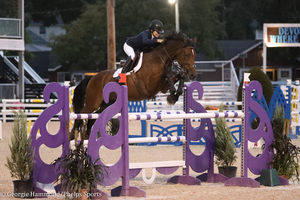 Emily Dougherty on VivaldiThree from a starting field of seven were clean, with Jaimie Auletto of Tabernacle, N.J., on Brazzaville, who had the fastest time of the class but one rail down, finishing in 33.674 for second, and Mia Mannis on Espace Killy.placing third with four faults in 37.327.

My partnership began with Zander when he was 3 years old," said Dougherty. "He came over from Ireland when he was 3 1/2,f and I broke him. We have learned through the level together ,and he is the most honest horse. He has stopped once in his time with me, he just doesn’t stop."

"He loves his job, he loves jumping, and he is an absolute character in the barn," said Dougherty. "He loves attention and his favorite thing is getting scratches and healthy treats. He doesn’t like anything unhealthy, I tried to buy him a funnel cake here, but he turned it down. I started training with Laura Chapot about two years ago, and she has really helped me figure things out with him. We don’t always have perfect rounds, but I am learning no matter how we do.”

“I showed my old pony jumper at the spring Devon Horse Show, in 2007 I believe, so looking back at that is amazing in comparison to where I am now." she said. "I think I completed one of three courses I was supposed to do on that pony, because I was definitely a bit backyard at the time. It is really cool to see that continuing to work and learning every single day has led me to this today."

"Anyone that is at a horse show is lucky, but I bought Zander with my own money and cleaned stalls to pay for him, so to be able to do that and have these results is incredible," said Dougherty. "I am normally happy just staying on, so I would never think that the horse I bought with stall cleaning money for years would do this for me.”