DEVON, Pa.--Callan Solem of Chester Springs, Pa., on VDL Wizard won the $5,000 Speed Stake at the Devon Fall Classic on Sept. 13, just edging out Laura Chapot on Gideon by a tenth of a second. 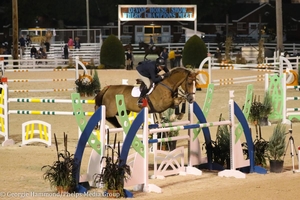 Callan Solem on VDL Wizard There were 27 competitors in the time first round class Friday evening.

Comprised of 13 obstacles, Steve Stephens’ course challenged athletes and their mounts to a number of bending lines, two combinations, and delicate verticals placed strategically around the course.

As third in the order of go, Solem and Horseshoe Trail Farm LLC’s VDL Wizard gave Devon crowds the highly anticipated first clear round of the evening, setting the pace for the remaining competitors with a swift time of 68.263 seconds.

Going later in the class, Chapot on Mary Chapot’s Gideon, a 7-year-old Dutch Warmblood, looked as if she might overtake Solem’s long held lead, but came just .15 seconds short, finishing in 68.413 to end in second place.

Solem and the 16-year-old Dutch Warmblood gelding have been partnered together for many years, accumulating a number of wins together.

Most notably, they were the highest placed U.S. combination at the 2016 World Cup Finals in Gothenburg, Sweden, finishing in seventh place in addition to representing the United States in many Nations Cups.

“Steve always does a fantastic job," said Solem. "The second horse I rode, Jasmijn, I am also very excited about. We are getting to know one another but she is so careful, such a competitor ,and she really hates to touch the jumps, so that is always great. Erdento Van de Leeuwerk is a new stallion that I feel so lucky to have. He is by Cradento and he is a little shy in experience but he is really special and I have a big future in mind for him, so it was great for him to get to go under the lights in preparation for the Grand Prix tomorrow.”

“It is great," said Solem of winning two days in a row. "You know, they say that you can’t win them all if you don’t win the first!”

“I have to say that this is my favorite venue," said Solem of Devon. "They get great crowds here – these people are steeped in tradition and have been watching showjumping for decades so they know what they are looking at. They have made so many improvements here, too. The footing is fantastic – we got a lot of rain in a short period of time yesterday and it looks perfect today. The show they put on here is a super opportunity and experience for greener riders and horses. The atmosphere here changes the game a little bit. The horses have to get used to being here and the people have to get used to being here because if you think they are going to ride the same here as they do everywhere else, they just don’t, they do all different things here. This show is a great learning experience for everybody."

“Wizard always speaks for himself, he is so overqualified," said Solem "He has done so much for me, and I wanted to do a class that he would enjoy. If the trailer leaves without him he is so upset, he wants to go to the show. If I can keep him in classes that are fun for him that is the goal and he felt like he had fun tonight. He got to win and I got some experience on the younger ones.”

Earlier in the evening session, Molly Wolfe and Cinco De Mayo captured the top placing in the $1,000 High Junior/Amateur-Owner Jumper class after producing the fastest time and being the only clean round in the jump-off. 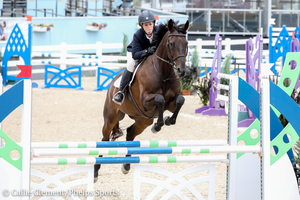 Amanda Dobbs and MJDobbs on MJ got a strong start to the division on Thursday in the $500 Thoroughbred Jumper class, where she beat a field of 15 competitors with a clear ride and speedy time.

Prior to that class, Dobbs and MJ won the $500 1.00m Jumper class out of a whopping 66 horse-and-rider combinations.

Keeping their winning streak going, Dobbs and the 11-year-old gelding went on to win the second class of the division Friday morning.

To cap off the division, Dobbs and MJ were seventh in the $1,000 Thoroughbred Jumper Stake, but were able to keep their overall lead and claim the championship title.

MJ had one win during his racing career, but Dobbs decided that she wanted to try jumping with him and made the decision to retire him.

Dobbs described MJ’s showjumping start as a wild one, but he soon settled into the change of pace and has since grown to love his new job.