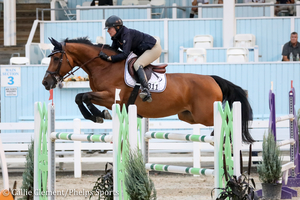 Callan Solem and Imogen De Regor“She is such a great horse and I am so lucky to ride her," said Solem. "She is as brave as a lion and really quick. She’s had a little break, so I just wanted to get her in the ring before the rest of the week. I’ve been riding her a couple of years now. She has really come into her own now. She has so much integrity and she’s not needy at all. Sometimes I would go to show her a turn or a liverpool and she doesn’t care. She is a great mare

“Being the first day of the horse show, I just wanted to check in with all of the horses and see how fresh they were," said Solem. "I have a couple of new ones that haven’t been here before. It’s so great for the young horses to come here and get some experience under the lights, especially thinking forward to Wellington.”

“I HAVE this younger string of horses that are a little bit greener, and this is the perfect experience for them," said Solem. "The atmosphere is great here, and it gives me a chance to see what I have to work on over the winter before we get back to Saturday Night Lights in Wellington.”

The Fall Classic has a record number of horses competing at this year's event.

Three combinations and a liverpool were featured within the long bending lines that made up the first round track.

A total of 16 horses and riders tried their hand at the first round, but many put faults on the scoreboard over elements 3A-B and 8A-B, which were both combinations set out of turns towards the in-gate.

Entering the arena second, Pablo Mejia conquered the first round track to produce the first clear ride of the evening to move on to the immediate jump-off.

Only three more competitors followed the pathfinder to advance to the jump-off, where the shortened six obstacle course challenged riders through rollback turns and a final one-stride element that warranted a balanced horse out of the corner if riders wanted to leave all of the rails up.

Solem was the first to challenge Mejia’s double-clear time and managed to overtake the lead by just over a second with a time of 35.904.

Imogen De Regor is one of Solem’s more experienced horses, which she has been riding since 2015.

Returning to Devon for the second time this year, Solem enjoys bringing her horses to the Devon Fall Classic because of the experience it gives them for places like the Winter Equestrian Festival during the winter season.

Claiming the second place ribbon was Mejia aboard his own Disabela.

The 8-year-old Warmblood mare soared to the first double clear ride of the evening, tripping the timers a 36.948 in the jump-off. Mejia’s runner-up placing in the Welcome Stake was his second top placing of the day, coming off of a win in the 7-year-old division earlier with another horse.

Ritter and the 12-year-old Belgian Warmblood gelding also produced a clear first round but had one rail in the jump-off.

Ritter and Hamlet VD Donkhoeve have been progressing up the ranks since February of this year, where they started in the 1.25m Schooling Jumpers at the Winter Equestrian Festival.

Laura Chapot on Thornhill Kate was the fourth clear over the first course but had two rails down in the jump-off to place fourth.

With a wide range of classes available, from young jumpers to the highlight event of the weekend, the $25,000 Devon Fall Classic Grand Prix on Saturday evening, there is something for every competitor.