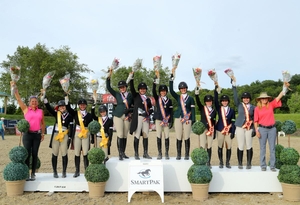 Each team had an assigned color with riders wearing armbands representing their team.

Many also exhibited team spirit and camaraderie with braided manes and tails done in team colors.

Each phase was placed and awarded individually, and the teams with the highest overall scores were crowned gold, silver and bronze medalists.

“ONE OF my clients qualified and thought I would be a great candidate for a Chef," said Perry-Merbler, who was serving for the first time as a team coach. "I was picked, and I am so thrilled to be here. I agree with so many of the riders in that I love the team spirit and camaraderie. It’s a really special experience because you rarely get that in this sport. This is another feather I can add to my cap and I’m really excited to be a part of it."

“This is my second year competing in these championships," said Weis, who won the first over fences phase.. "Celebration] loves this ring, and I have actually been practicing for this big, open space by fox hunting. You can really pick up a gallop and go in the grand prix ring. He was great today. He is a former college horse at SUNY Morrisville, and I just purchased him after leasing him last year.”

“I appreciate the opportunity to have a team and compete in this format," said Corvani of her first time competing in a team format championship. "I spoke to my trainer a few years ago about what an individual sport this is and how I wanted to be able to have an opportunity to ride on a team. Just a few years later and it has evolved into this."

The three man Lime Team of Zone 2 won the silver medal, and it consisted of Corinne Macaulay of Bronxville, N.Y., on Pilgrim de Blue Mery, Madelyn Sano of Clifton Park, N.Y. on Mahogany, and Missy Palmisciano ofPelham, N.Y., on Arcondo.

Another three man team, the white, mixed Zone 1 and 2 team, of Isabelle Mesiarik of Pottstown, Pa., on Azuro of Zone 2, Kaitlyn Leahy of Durhamn, Conn. ,/on Hudson aka My Scholarship of Zone 1, and Sherrill Woessner /ofColchester, Conn., on The Artful Dodger, also of Zone 1, won the bronze medal.

All the riders received polo shirts and tote bags from the Championships' presenting sponsor SmartPak.

Medals and ribbons were awarded to the top three teams and the gold medal team receiving embroidered coolers.

The horse-and-rider combinations went on to compete in the Individual Championship Sunday.

The Individual Championship also consists of three phases, including an under saddle, a classic hunter derby-style course and a handy hunter course.

Each phase will be placed and awarded individually and the horse-and-rider combination with the highest overall score from all three phases will be crowned Individual Champion.