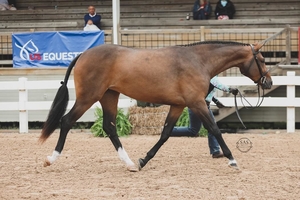 Quite A Star (Photo by Shawn Simmons)North Hill Farm’s Quite A Star, by Qredit out of Feiner Dance, earned the coveted title, and Linda Mancini’s Caberneigh, by Cabardino N out of Special Consideration, was the Overall Reserve Grand Champion.

Judges Chance Arakelian of New Canaan, Conn., and Jessie Lang of Jackson, Wyo., evaluated the young hunter prospects at the Virginia Young Horse Festival in Lexington, Va,, on Aug. 24 and then the West Coast Finals on Aug. 28, after which they named the two East Coast fillies as Overall Champion and Reserve..

“SHE WAS really well balanced, and she has a beautiful neck and shoulder,” said Arakelian.

“She belongs to Maggie Neider of North Hill Farm in New York,” said Belin-McDonnell. “I have several foals from this filly’s mother. I’ve had a bunch of them that did the performance divisions, and we call the Feiner Dance mare ‘The Golden Goose.’ I’m so thankful to have such a great person who raises those young horses initially.” 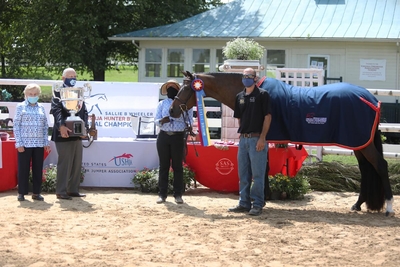 “I’m really thankful for the opportunity to be able to show at an event like this,” said Belin-McDonnell. “I appreciate people like Keedie Leonard, Kimmy Risser, everyone on the Hunter Breeding Committee, and all of the sponsors for giving us the opportunity to do this. I know it’s not for the faint of heart, and it’s not always as popular as the grands prix, but it’s a super important part of developing horses in this country, so I’m appreciative that we had the opportunity to showcase our horses here.”

Cambria, by Rivermon out of Capella, a 2-year-old Holsteiner filly owned and bred by Amy Concha of Carlsbad, Calif., and handled by Carleton Brooks was the West Coast Best Young Horse.

“I always liked the conformation horses,and I did racehorse sales,” said Brooks. “They had hunter breeding in the ‘80s on the West Coast and then they stopped it, so I wanted to start it again to grow the sport. I enjoy the detail and sportsmanship of hunter breeding.”