LIMA, Peru--Adding another bronze medal to the tally for the United States of America at the Pan American Games on Friday, Aug. 9, was two-time Olympic team gold medalist Beezie Madden riding Breitling LS. 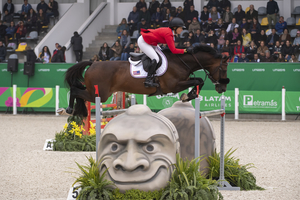 With Eve Jobs and Lucy Deslauriers also contesting the individual final, the U.S. Jumping Team saw all three riders finish in the top 10.

The top 35 riders in the individual standings competed on Friday for the first round over a challenging course set by course designer Guilherme Jorge of Brazil.

All riders started on a clean slate of zero faults, with their previous three rounds during the week only counting for qualification and determining their order of go.

Following round one, the top 20 returned for the second round.

AFTER TWO rounds, four riders were tied on four faults apiece, necessitating a jump-off for the bronze medal.

First in the ring for the tie-breaker was Madden of Cazenovia, N.Y., on Breitling LS, Abigail Wexner’s 13-year-old Dutch Warmblood stallion.

They had incurred four faults in the opening round of the day and were clear in the second round.

“I think he was maybe a little more attentive in second round,” said Madden. “I didn’t really adjust for the fact that his energy level was a little more down when he first started. I needed to wake him up a little bit more for the second round.” 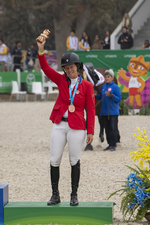 Bronze Individual  Jumping, Beezie Madden (Photo by Allen MacMillan)In the jump-off, the pair made easy work of the shortened course, cruising home clear and setting the time to beat at 42.47 seconds.

“It was suspenseful,” said Madden of the competition’s conclusion. “I was a little at a disadvantage to have a rail down in the first round, but when only four went clear, I figured we had a decent chance of jumping off for a medal in the best-case scenario. When that came about, I was excited we had a chance for a medal. It was a little tough going first, but it was really winner take all. I figured I would lay it all out there, jump clear as fast as I could, and hope others made mistakes trying to catch me. Credit goes to my horse. He’s a naturally quick horse, and I’ve done quite a few jump-offs with him. I felt it was good to have that experience going into that pressure round.”

The Pan American Games marked the 10th major games appearance for Madden, and the 55-year-old proved she is still at the top of her game.

This bronze medal is the fifth individual medal. along with two silvers and three bronzes, that Madden has won in her career and her 13th total medal counting individual and team medals in major games championships.

While championship competition has gotten easier the 10th time around, Madden said it’s “still exciting and what we do this for.”

“It feels very nice!” said Madden of adding two more medals to her collection. “Eve asked how many medals I had after our team medal. Today she said, ‘Now you have a baker’s dozen!’”

“It’s huge,” she said. “It’s always great for your team when you come through with something you had as a goal for the year. Our staff works really hard to help me and to make that happen for me, my husband John, and our owner Abigail Wexner. It’s always our goal to represent our country and try to win some medals. It’s not an easy task, so when it comes out the way you wanted, it’s always a great feeling.”

With her podium finish at the Pan American Games, Madden automatically qualifies for grand prix events around the world for the next four years. 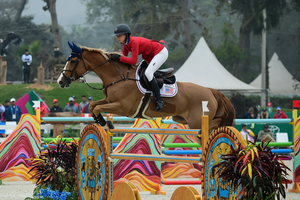 Eve Jobs on Venue d'Fees des Hazalles (Photo by Sarah Miller, MacMillan photography)Next in for the jump-off was Jobs of Los Altos Hills, Calif., on her own Venue d’Fees des Hazalles, a 14-year-old Belgian Warmblood mare, who was clear in the first individual round and had four faults in the second round.

They had eight faults in the jump-off in 46.06 seconds to finish in fifth place in the individual final.

“It’s an honor to represent my country,” said Jobs of her first major games experience. “We had a great team partnership, and we bonded really well. It’s my first time at a team championship, and that comes with pressure in itself. Getting to jump here and jump for my country with my teammates, I’ve learned so much by going through this process.”

When Eugenio Garza Perez of Mexico on Armani SL Z had a refusal and retired as the last to go in the jump-off, the bronze medal went to Madden. 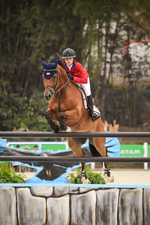 Lucy Deslauries on Hester (Photo by Sarah Miller,  MacMillan photography)Lucy Deslauriers of New York, N.Y., on her Hester, a 14-year-old Belgian Warmblood gelding, recorded four faults in each of the individual rounds, which gave them eight total faults for ninth place.

“I personally didn’t think I got my best rhythm the first few jumps, and it took me a little bit to get the pace I wanted and the type of ride that would have been ideal,” said Deslauriers, 20.

“I’m lucky to come out of a first championship experience in the top 10,” she said. “I was really lucky to be alongside Beezie as a teammate and a leader and have her show us the ropes. Getting to compete with my dad (Mario Deslauriers, who rode for Canada) also at a championship was a lot of fun.”

“I think it was a really fun week with Eve, Lucy, and Alex [Granato]." said Madden. "It was a fun group, and a good team atmosphere. It was a great week for them to not only gain experience, but they did really well too.”

The jumping individual gold medal went to Marlon Modolo Zanotelli of Brazil on Sirene de la Motte, who was double clear. José María Larocca of Argentina on Finn Lente had one time fault for the silver medal.