LIMA, Peru--The U.S. Eventing Team won the team gold medal at the Pan Am Games in Lima on Aug. 4 and secured its qualification for the Tokyo Olympic Games next summer. 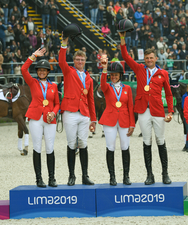 Eventing Team Gold(Photo by Allen MacMillan)The team finished on a collective score of 91.2,with four double clear roundss in the final phase.

Brazil earned the second Olympic qualification slot and ended on a 122.1 to win team silver and Canada finished in third with an overall score of 183.7 for bronze. 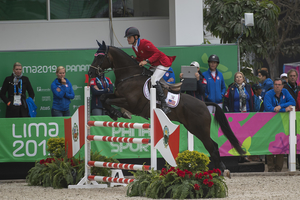 Doug Payne finished just off the podium with Star Witness for fourth place, while Tamie Smith and Mai Baumfinished 17th.

Smith of Murietta, Calif., on Mai Baum was the first U.S.rider to test the show jumping track, designed by Guilherme Jorge of Brazil, and produced a beautiful double clear round to jump-start the day for the United States.

“He feels ready to go again," said Smith. "He just felt great today. He really ate up the atmosphere and couldn’t have been better. I’m really proud of him,” said Smith. “That’s what makes this sport beautiful. I’m just really grateful that my teammates performed great. My horse is wonderful, and we were both a little caught out there yesterday and that won’t be a mistake we have again.”

WITH THE pressure mounting after two strong rounds from the Brazilian team, Payne of Aiken, S.C.,on Starr Witness also was double clear round for the team.

“For a championship like this, you show up and have the vast amount of support that we get both from U.S. Equestrian, the owners, all of the support staff," said Payne. :We are really the top that’s visible, but we wouldn’t be here without their help, and of course the horses. They put forward a great effort and we’ll forever be appreciative.”

Symansky of Middleburg, Va., on RF Cool Play had a rail in-hand to keepher second-place position on the leaderboard, but didn’t need it, as she crossed through the timers with a fault-free effort. 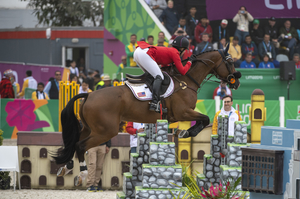 Lynn Symansky (Photo by Allen MacMillan)“This is a group that knows each other already," said Symansky. "We all get along really well, and it does make the pressured environment easier when you have a group of people that supports each other when things don’t always go according to plan. It’s pretty special to not have everything go one-hundred percent for everyone yesterday and to come back out and do four clean rounds. It’s a nice feeling to wrap everything up with.”

For Martin, the anchor position for the team was a successful one during both the dressage and cross-country phases, and the final day of competition was no exception.

Riding Tsetserleg, an 11-year-old Trakhener gelding (Windfall x Buddenbrock) owned by Christine Turner, Martin secured not only the team’s gold medal finish but also his own individual gold with his fault-free ride.

“This is a big relie," said Martin. "We all worked very, very hard. There was a lot of pressure coming here, and it’s just good to pull off a good performance. I think it was a brilliant competition. It was everything you dream of in a championship. I think the crowd had an exciting contest to the very finish, and this was much harder of a competition than I expected. We came here and were under the gun a bit, and we all stepped out and tried our hardest…we have great horses and good riders. We have the best coach. There was no stone left unturned.” 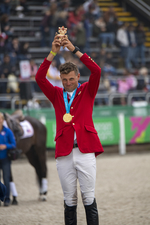 Eventing Individual Gold Boyd Martin(Photo by MacMillan Photography)“I’m just honestly really pleased to be a part of this group," said Chef d’Equipe Erik Duvander. "Today is the rider’s day and the owner’s day. I’ve seen how much work these guys have put into this; the preparation and how much it means to them, and then be able to execute. I couldn’t wish for a better ending than four clear rounds, and that’s a really strong performance. Everyone stayed on task through to the very end. If we can keep building on what we did here and keep that momentum it will get us closer and closer. It’s about using every day we have before Tokyo to keep improving in the same manner that we’ve been working now,” he concluded.

The competition also marked the end of an era for the U.S. Eventing Team, as Managing Director Joanie Morris completed her final championship competition with the program.

Morris, who has been a figurehead in the discipline for the last decade, closed out her tenure accomplishing the only goal for the Pan American Games, earning the coveted qualification.

“I’m incredibly proud of this entire team," said Morris. "This job has been an incredible privilege, and I was proud to see it through to Olympic qualification, as that was the goal here. Individual gold and silver are just the icing on the cake, and it was two riders who have been in this program since the beginning of my time with US Equestrian. I’m very proud of them and look forward to all of the team’s successes in the future.”