LIMA, Peru--Sarah Lockman of Wildomar, Calif., on First Apple performed a strong Intermediate I Freestyle to win the individual gold medal  at the Pan American Games on July 31. 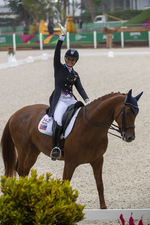 Tina Irwin of Canada on Laurencio won the silver medal with a score of 77.780 percent, while the U.S.’s Jennifer Baumert of Wellington, Fla., on Handsome secured the bronze with a score of 75.775 percent.

The pair have been unstoppable in their first international championship debut, recording class-topping scores across all three days of competition.

“I AM SO proud of my horse and, to be honest, with myself," said Lockman. "I put a lot of pressure on myself today because the last two days were so phenomenal. I couldn’t have asked for anything more. I’m just over the moon excited and may still be in shock, but it will sink in soon. I’m just so happy with that score and so happy that I was able to do that on this international stage.” 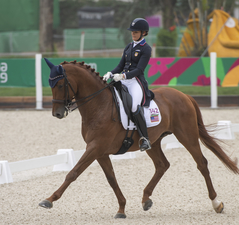 Sarah Lockman (Photo by Allen MacMillan)Lockman has only ridden Apple for less than a year, as the stallion was purchased in October of 2018 and did not arrive stateside until early 2019.

The speed of their progress has given Lockman the confidence to try and reach her ultimate goal of one day competing at the Olympics.

The experience she takes home from this competition will be invaluable in her efforts to achieve that aspiration.

“Being in a competition like this really makes the horse and rider a lot closer," said Lockman. "We traveled so far, and there’s a lot of stress involved. I put a lot of pressure on myself to perform for my team, my owner, my coach and everybody that’s here. I just look to Apple, and I know we can pull it off together,” she said.

With a resounding start to their international championship career, Lockman and First Apple will depart from Lima with high expectations for their future, but Lockman will always remember where she started. 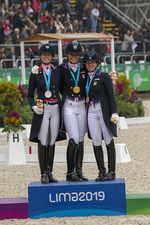 Dressage Individual Medals, left silver, Tina Irwin, gld Sara Lockan and bronze Jennifer Baumert (Photo by Sarah Miller MacMillan photography)“I’ve been really committed to this sport," she said. "When I was 10, I told one of my trainer’s that I was going to grow up to be a horse trainer and go to the Olympics. This is step one, being able to represent my country here, and I’m looking forward to whatever comes next. It’s a complete dream come true. I’m a small-town girl, and I’m so fortunate to that have had so many people believe in me from the beginning. I really think hard work pays off, and I have worked so hard to be here. I have something to say to all of the little girls out there who tell someone that they want to go to the Olympics one day, it is possible.”

Jennifer Baumert on Handsome, a 14-year-old Hanoverian gelding by Hochadel out of Weltmeyer owned by Betsy Juliano LLC, helped the U.S. Dressage Team earn the team silver medal with her performances in the Prix St. Georges and the Intermediate I tests, but her Intermediate I Freestyle was a highlight, as she recorded a career-high 75.755 percent.

“Overall, I was very pleased," said Baumert "There were no major mistakes in the test, and he is just so electric here. In other venues he’s a little bit quieter, and it’s a different ride, which means I need to make adjustments quickly, but you can’t complain for having that kind of energy. I was really happy with the trot work at the end because by that time he was lit, so it felt really nice. Over the past few days, I’ve figured out how to ride him in this atmosphere, and we’ve had a very deep bond for a long time. I’ve learned how to ride my horse a little better each day here.”

Baumert and Handsome were part of the gold medal team at the Dressage Nations Cup in Wellington, but earning a team and individual medal at their first continental championship for the United States has been incredibly rewarding for Baumert, who has dedicated her life to perfecting the sport. 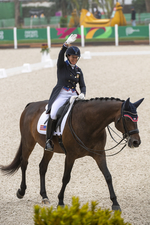 Jennifer Baumert (Photo by Allen MacMillan)“I know that my horse is capable, I’m capable, and we have an awesome freestyle," she said.  "Of course, I was hopeful, but it’s all up in the air until it really happens, and I’m just so proud. Obviously, this is any horse-crazy kid’s dream come true. I’m so thankful to Betsy Juliano, the owner of Handsome, my coach Debbie McDonald and Morgan Klingensmith, who is the most amazing groom in the entire world.”

Chef d’Equipe Debbie McDonald has been an individual medalist at the Pan American Games herself, riding the famous Brentina to both a team and individual gold at Winnipeg in 1999, and her pride in the athletes and their accomplishments this week has been palpable.

“This is pretty amazing and overwhelming as someone who knows how much their lives are going to change after this," said McDonald. "For those two to walk away with medals on their necks, it is life changing. This has been a tremendous week for our team, and I’m looking forward to the progress we make from here.”