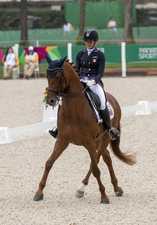 Sarah Lockman(Photo by by Allen MacMillan)A superb score of 78.980 in the Intermediate l Freestyle clinched it for the 30-year-old who beat Canada’s Tina Irwin and Laurencio by just over a single percentage point, while Lockman’s team-mate, Jennifer Baumert, claimed the bronze with her gelding Handsome.

This was America’s ninth individual Dressage title in the history of equestrian sport at the Pan American Games, which dates back to Buenos Aires, Arg. in 1951.

And Lockman made it a US three-in-a-row as compatriot, Steffen Peters, posted a consecutive double at Guadalajara (MEX) in 2011 and Toronto (CAN) in 2015.

Both Small Tour and Big Tour combinations compete at the Pan Ams, and the Small Tour riders were first to battle it out in the Intermediate l Freestyle today.

JUST FOUR horse-and-rider partnerships contested the higher-level Big Tour class that followed, but the medals were decided by the biggest scores on the day, regardless of the category, and it was Small Tour contenders Lockman, Irwin and Baumert who posted those to claim the top three steps of the podium.

The USA was never eligible for one of the two Olympic team qualifying spots on offer because they sent just three Small Tour riders to Lima.

They already had their Tokyo ticket after claiming silver at last year’s World Equestrian Games on home soil in Tryon and were quite happy to settle for silver in the team competition won by Canada on Monday.

But today they were gunning for the gold and they got it, thanks to a stunning performance from team debutante Lockman and her sensational nine-year-old Dutch stallion.

“I’m over the moon excited about it!” Lockman said. “It’s everything I ever dreamed of and wanted, and I’m so proud of my horse and grateful to everybody who helped me get here and the whole support staff that have been here helping me at my first ever Games experience - it’s been truly unforgettable!”

Additional quotes and photos will b posted tomorrow.