LIMA, Peru--The U.S. Dressage Team recorded three excellent results to take the early lead at the Pan American Games, but after Monday's second day of team competition, the U.S. fell behind Canada to take the silver medal with a team score of 217.81 to Canada's gold medal winning score of 220.287 while Brazil won the bronnze medal with 204.223. 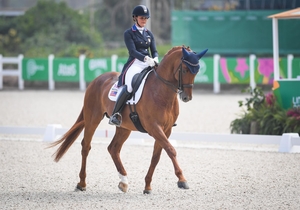 A full story with quotes on the first day's competiton follows, and the full story on today's second day of competiton will be posted tomorrow.

Led by Chef d’Equipe Debbie McDonald, on the firsr day the team of Nora Batchelder of Williston, Fla., on Faro SQF, Jennifer Baumert of Wellington, Fla., on Handsome and Sarah Lockman of Wildomar, Calif., on First Apple performed the Prix St. Georges test, earning a team total of 219.970.

DRESSAGE had eight teams and 11 individuals that competed in the main arena at Equestrian Club La Militrar La Molina, the sole equestrian venue for Lima.

A total of 30 competitors rode in the Prix St. Georges, while eight entries contested the Grand Prix.

Eddy De Wolff of The Netherlands is serving as the Ground Jury President, along with colleagues Janet Foy of the U.S,, Mary Seefried of Australia, Brenda Minor of Canada, and Thomas Kessler of Germany.

Batchelder and Faro SQF, an 11-year-old Hanoverian gelding, were the first combination to test the atmosphere for the United States.

They scored 71.441 percent, a solid score for Baumert and Lockman to build on in the later sessions of competition.

“He was really good in there,"  said Batchelder. "I thought he went in and took it all in and was pretty brave about it. We had the one uncharacteristic mistake that is unfortunate because he’s usually a pretty clean-test kind of guy. He tried really hard, and I thought overall his canter work was really strong and the trot was accurate. I was proud of him.”

Faro SQF is the only horse in the American contingent bred and started in the United States.

Batchelder is proud of the significance their nomination to the team has meant to breeders in the U.S., including Faro SQF’s breeder Jill Peterson.

“It’s really exciting," said Batchelder. "He was bred 20 minutes down the road from where I live now. It’s fun and it feels like he’s a real homebred. He’s American all the way.”

Shortly after the mid-day break, Baumert on Handsome, a 14-year-old Hanoverian gelding, scored 72.441 percent to help the team’s overall placing.

Baumert and Handsome’s test was energetic and expressive, displaying some of their best trot work to date.

“I was really happy how Handsome handled the environment," said Baumert. "He really lit up when we got in there and got all big. I knew it was going to be nice. For the most part, I was super happy with the performance. Towards the end he got a little too much go, but I can’t complain. It’s a good thing to have. Trot extensions aren’t his best thing, so it was really nice to feel his front end come up and float a little bit. I was really happy with that and overall the consistency. He goes in there and does it every time.”

Baumert has produced excellent results with Handsome during their tenure together and a selection to a Pan American Games team has been a lifelong goal.

The relationship the pair has established together is one that Baumert deeply cherishes.

“I just love that horse to death," she said. "He has such a personality. I’ve known him for four years and have been competing him for three. He’s really changed a lot in that time. He’s an introvert, and he’s come out of his shell. It is so rewarding. He wasn’t an unhappy horse when I met him, but that is one happy horse. He’s happy in his skin. He’s the happiest horse I’ve ever known, and I love him so much."

The U.S. and Canada were separated by the slightest of margins throughout the day with the pressure falling to anchor combination Sarah Lockman and First Apple, a nine-year-old Dutch Warmblood stallion.

Lockman recorded a personal best of 76.088 percent to top the class and secure the lead for the U.S. in the team medal race.

“He came out feeling super and was 100 percent with me." said Lockma. "He goes around that ring and is like ‘I am here,’ and that’s what I felt the whole time. He was answering every question I asked him perfectly. There are little things that I think we can still improve on, and it can be better tomorrow, but I’m more than happy with that, obviously. The final centerline was my favorite part and then it all just hit me. I’m just so happy.”

“I’m so proud to be here, to represent my country, and to pull off a personal best when it really counts the most for my team," said Lockman. "I’m really proud of my horse and so thankful to everyone who has helped me get to this point. As soon as I get on my horse, I’m in my comfort zone, and it’s like home. We had a job to do and we did it.”

Batchelder and Lockman are both new to international championship competition, while Baumert and Handsome represented the United States in the 2019 Nations Cup at the Global Dressage Festival in late March.

Chef d’Equipe Debbie McDonald, in her first major continental championship with the U.S. Dressage Team, was thrilled with each combination today, commenting on their passion and drive to perform well.

“I could not be happier with the riders and the horses today," said McDonald. "It makes me emotional. I can’t help it. It shows the passion they have for their horses and how hard they’ve worked to get here. It just means everything. I’ve been there and I know. For me, it just shows it’s heartfelt. It’s really who they are, and I hope everyone understands how much this means to them. This is our future.”

Team competition will continue Monday, July 29 with the Intermediate I and Grand Prix Special, which will determine final results and medals for team competition.

Individual competition will take place on Wednesday, July 31, with the Intermediate I Freestyle and Grand Prix Freestyle, deciding individual medalists.