HICKSTEAD, England--The U.S. Jumping Team placed fifth in the Nations Cup in Hickstead on July 26 during the Royal International Horse Show at the All England Jumping Course. 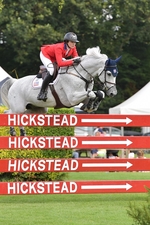 “Everybody had good rounds today, but you need great rounds to win a Nations Cup,” said Ridland. “It just wasn’t meant to be today. It was a young team, with the exception of Laura, and this is why we sent these teams to Falsterbo and Hickstead, to gain this type of experience over these types of courses and to experience the best competition that Europe has. All the other teams here today were fighting for spots for the Nations Cup Final.”

Tyree, 25, of Chicago, Ill., turned in a clean round in round one and then a four-fault performance in round two for the team riding Bokai.

THE 25-YEAR-OLD Porter of Wellington, Fla., on Caletto Cabana, had a rail in round one and a foot in the water in round two.

Kraut of Royal Palm Beach, Fla., rode as the anchor on Confu, and had a rail down in each round.

The U.S. team finished the two rounds on a score of 20.

“You’re never happy when you finish fourth or fifth; you’d much rather end up on the podium. That’s what we aim for and we felt like we had a team that was capable of that. We just missed, but it still was a good day,” said Ridland.

While they did only place fifth, the young U.S. team beat a number of top teams including Brazil, sixth with 24 faults, Germany , seventh with 21 faults, and Great Britain, eighth with 28 faults.

Porter and Tyree had both also ridden on the team at the Nations Cup in Falsterbo, Sweden two weeks before, which placed fourth.

“You have to test young riders under fire,” Ridland said. “They have to go out and perform, and they did that today. These two weeks at Falsterbo and Hickstead were a very good step in the careers of these young riders.”

The team from Sweden finished on four faults to win, while Ireland claimed second with eight faults, Italy placed third with 10 faults and Belgium was fourth with 16 faults.