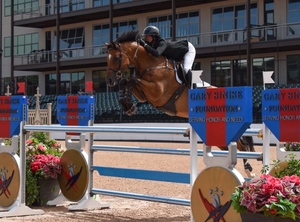 Katlynn Butler on MTM Ctokis CleverOver a course designed by Bernardo Costa Cabral, professional rider Lauren Balcomb of Citra, Fla., coming into the final on four faults on Verdini D'Houtveld Z, was clean to win the individual gold medal, and amateur rider Jesse Smith of Wellington, Fla., also put in a clean round on Charles Pinckney Windsor Z to win the silver with a total of eight faults over the three days.

With the only clean jump-off ride among the three, Butler won the bronze on her young horse, MTM Catoki's Clever.

BUTLER has been an avid competitor in the Zone Jumper Team Championships over the last three years, moving up a division each year.

After learning about the Platinum level at 1.40/1.45m last fall, she made it a goal to be here.

"I found out about the championships] from DiAnn Langer last year at the Gold Star Clinic," said Butler. "At that time I hadn’t gotten Clever, the horse I rode today, yet. So I wasn’t really sure how I was going to get here, but I really wanted to compete at this event."

"It’s been really great," said Butler. "It gives you something to work towards that’s not indoors or state finals. And I get to see a lot of people that I don’t normally see. Also, it’s really nice to get team experience and then also still have your own individual round you’re fighting for."