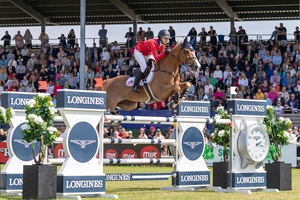 “We had the youngest team out there by a mile," said Ridland. "We were up against some real teams with big guns. For the European teams, it’s a qualifier for the Nations Cup Final in Barcelona and no one was letting up. We aim for the podium every time ,and we could have been there. We definitely had a good day. They held themselves up very admirably, and we’re pleased with how the day turned out.”

The young team from the United States of America was led by Jobs of Los Altos Hills, Calif., who turned 21 five days ago.

“She did not disappoint today,” said Ridland. “It’s confirmed pretty obviously why she’s on the Pan American team. Those were two great back-to-back rounds. I’m pretty happy about that. She was a big part of today’s team, and it was a great set up for Lima a few weeks from now.”

“MY HORSE jumped amazing today," said Jobs. "It always gives you confidence when you go clear, but with a Nations Cup format of two rounds of equal importance, you have to focus and try and produce another clear.”

“She is such an unbelievable animal,” said Jobs of the mare she has ridden for two years. “In a big atmosphere, she grows and rises to the occasion. Having her be so focused and on it has really helped me focus on riding the best I can. It’s given me a lot of confidence.”

Falsterbo was Jobs’ third senior Nations Cup team and the second time she and her horse recorded double-clear performances.

She will head to Lima, Peru, for the Pan American Games in three weeks.

“It’s the best preparation I could ask for going into Pan Ams,” she said. “I have some great forward momentum. Hopefully, I can keep it up.”

The team pathfinder in Falsterbo was 25-year-old Porter of Wellington, Fla.

Riding Caletto Cabana, a 12-year-old Holsteiner gelding, Porter had four faults in the first round and returned for five faults in round two.

Catherine Tyree, also 25, of Chicago, Ill., on Bokai, a 13-year-old KWPN gelding, had scores of four and eight in the two rounds of jumping.

Anchor rider Chloe Reidof Wellington, Fla., at just 22 years old, has had experience in Sweden, having ridden on the team and contributed a double clear when the U.S. last competed in Falsterbo in 2017.

Riding Luis P, a 10-year-old Deutches Sportpferd gelding, Reid had four faults in the first round but returned for a clear round in round two.

Following the first round, the team from the United States of America sat in fifth place on eight faults, just two rails away from the leading team from Sweden, that totaled zero faults in round one.

Finishing on a total of 13 faults, the team moved up to fourth place in the final standings behind the winning team from Sweden that thrilled the hometown crowd by winning on just four faults.