MECHANICSVILLE, Va--Addison Reed, 14 of Mechanicsville, won the gold medal in Zones 3 and 4 1.20m/1.25m jumper competition on July 13 with no faults over three days. 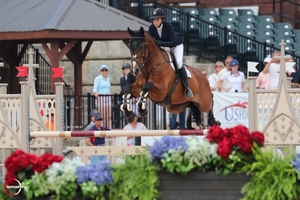 Addison Reed on GoliathRiding Goliath, the 14-year-old Reed had no faults at all over three days to capture the gold medal in the 1.20/1.25m Junior Individual section.

Pedley captured Silver with a clean jump-off ride, with Jones rounding out the top three.

“The last three days have been a bit of a blur," she said. "I woke up this morning and thought it was Friday! It’s gone by really fast. The week was organized really well this year, and it's been a lot of fun.”

“The courses all week have been awesome and super fun," said Reed.." Bernardo (Costa Cabral of Portugal) is an awesome course designer.”

REED IS trained by her mother Sulu Rose-Reed.

And Reed’s grandmother, Gail Thompson, also an accomplished equestrian, was one of the Zone 3 chefs d’equipe this week.

“It’s in the blood,” Thompson said.

From jumping-off for medals in every section, to sisters celebrating gold and silver, to earning a birthday gold, it was an amazing final day for the individuals competing in the USHJA Zones 3 & 4 Jumper Team Championships at the Tryon International Equestrian Center.

From 8 a.m. to 12:30 p.m. the top contenders in five sections rode for a position on the podium and the competition was fierce.

FEI Course Designer Bernardo Costa Cabral of Portugal set Championship-caliber tracks that were challenging but fair, resulting in a jump-off for medals at each height.

Two were tied for third, Judy Sutton on Win a Date, and 2018 Gold Medalist Katlynn Butler on Marvel, and with a clear jump-off, Butler of Mechanicsville, Va., won the bronze medal.

Three riders, who after three days each had a final score of four faults, jumped-off for the silver and bronze medals.

Mackenzie’s older sister, Ashley Ann McGehee of Jacksonville Beach, Fla., on Mr. Snuffleupagus was the only clear of the three to earn silver.

Winning the bronze as the fastest four-fault ride in the jump-off was Taylor Harpman of Manakin Sabot, Va., riding Kablesse V/D Donkhoeve.

Amateur rider Diana Harris of Creedmoor, N.C., had a wonderful week riding Flair WS to not one but two gold medals.

After helping to clinch the gold in the team competition, Harris was leading as she went into her final round of the 1.10/1.15m Adult Section

Not folding under the pressure, she rode a smooth track to earn the top spot on the podium with a perfect three day score of zero faults.

She was also celebrating not just her birthday, but her husband's as well as the couple were born on the same day!