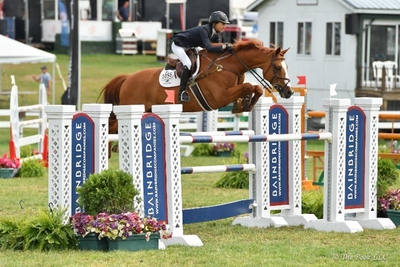 Chapot topped a field of 34 horses by turning in two clean rides and a jump-off time of 33.150 seconds on Calafornia for her second win in two days on the chestnut at Lake Placid.

She also placed third on Shooting Star and fifth on Zealous.

Second place with a clean jump-off ride in 37.396 seconds was Cassandra Kahle on Elertina with fourth going to Tomas Yofre of Argentina on Betagravin.

She won the class on Umberto while placing second on Little Firebird and third on Gideon.

ON JULY, as the United States celebrated its 243rd birthday, Chapot celebrated yet another win at Lake Placid.

Chapot rode Calafornia to one of only four clean rides over the 12-jump, one -round course designed by Bernardo Costa Cabral of Portugal.

She blew away the competition, finishing in 59.390 seconds.

Finishing second was Alberto Michan of Israel, the day's first entry who set the mark to beat with a clean ride in 70.088 seconds.

Yofre won on Betagravin, topping a field of 25 entries, 14 of which reached the jump-off by going clean over the first-round course designed by Bernardo Costa Cabral of Portugal.

He finished the jump-off clean in 32.498 seconds to edge the time of 32.884 seconds turned in by Chapot on Out of Ireland.

Chapot also finished third on Zealous with a clean jump-off ride in 33.434 seconds, while Yofre finished fourth with a time of 33.970 seconds on Kavalli Di Magico.