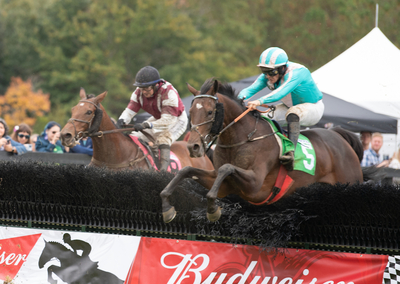 Brion and was on the way to finishing first, second and third when the three she trains, The Insider, Clara Belle and Topic Changer, approached the last jump almost side by side, with The Insider, who had won by 13 lengths at Far Hills, expected to go on to win.

But Clara Belle, ridden by Jamie Bargery, stumbled over the fast fence, almost falling and losing her rider, and in the process brought down The Insider, ridden by Parker Hendriks, leaving to Topic Changer to go on to win, eased and all alone,

"Jamie said the fence just came up all wrong for Clara Belle," said Brion. "She all  but took out Topic Changer, too."

"That's a trainer's nightmare," said Brion. "But 3 year olds will be 3 year olds. The three were 25 lengths in front of Hoffman. Jut pop the last fence. One stayed up, anyway."

WYCOFF, who owns flat race horses, is a new owner for steeplechasing, having put a few horses in training with Brion after meeting her at Saratoga.

"It was great for Jordan Wycoff to win," said Brion. "I think Topic Changer might be the 3-year-old champion after winning at Aiken and now winning this."

"Everybody's fine," said Brion. "The horses were checked out by my vet at Far Hill this morning and they're all fine."

Hendriks is Brion's stable jockey, and Brion said he gets the choice of which of her horses he will ride, and that he chose The Insider off that horse's win at Far Hills.

Brion said she was delighted that Barry John won as he has been so good to her.

"Barry John comes up once a week to school horses for me," said Brion. "Barry John is in his mid 30s and very experienced. Sometimes it's nice to have an experienced rider, and not all riders fit all horses."

Upland Flats Racing's Pleasecallmeback, trained by Brion and ridden by Foley, won the $20,000 Ratings Handicap by 3 1/4 lengths over Salamanca School, trained by Young.

"I'm going to take Pleasecallmeback to Florida with me this winter and run him on the flat, either on the turf or on artificial going. He has good form from Gulfstream from when he was trained by Roger Attfield. He's tricky over jumps. He's not the most careful horse. He won at Colonial and was second at Foxfield, but with the ratings the way they are, he's going to struggle.

Horses trained by Brion finished first, second or third 74 times from 144 starters, or finishing on the board just slightly over 50 percent of the time, an impressive finish to the year.

And she also won over $1 million in purses, only the second, after Jack Fisher, to have done so.

"I'll have a lot more horses next year," said Brion."I have 30 or 31 horses that are out at barns or turned out coming back into training at the beginning of the year. And I'm going over seas in December. I'll probably buy another 10 or so."

"My flat horses are really picking up now, too," said Brion. "That's really important to me."

The Leading Owner, Money Won title had come down to a battle at Charleston, the final meet of the year, between Bruton Street and Irv Naylor.

Each had only one entry at Charleston, and Bruton Street's Neotropic won while Naylor's Flying Scotsman finished fifth in the same race, making Bruton Street Leading Owner with $450,750 to Naylor's $423,100.

Kingsley also saddled Hurricana Farm's Merry Maker (Ire) to win the Training Flat race by 2 3/4 lengths, but more importantly, Kingsley gave a leg up to his young daughter Taylor for the winning ride.