MONTPELIER STATION, Va.--Keri Brion saddled three winners, including the winner of the $50,000 Montpelier Cup Fillies and Mares Stakes, at Montpelier Hunt Races on Nov. 5 to increase her total in Trainer, Money Won to $1,059,250, with one more meet to go, making her only the second trainer ever to go over the $1million mark in one year. 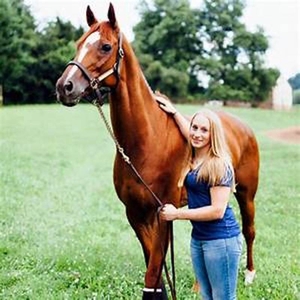 Keri BrionJack Fisher, who was Leading Trainer, Races Won last year, was the first and only other trainer to have accomplished that feat.

Last year, in her first year of training, Brion  had the Eclipse Award winning horse and was Leading Trainer in money won, and she said at the beginning of this year that she wanted to prove that that was not a fluke.

And this year, without her top horse, 2021 Eclipse Award winner The Mean Queen, she not only saddled horses that won over $1 million, she was also second in Trainer, Races Won, with 30 wins to Leslie Young's 36 wins, with one more meet to go.

She proved in spades that last year was no fluke.

This year, Brion won the 30 races with a number of different horses.

"It's harder to win that amount of money without  a horse like The Mean Queen," said Brion. "And I dd it without winning a grade one stake."

"Leslie had 15 wins over timber," said Brion."I had only one timber win. From a business point of view, it doesn't make any sense to have timber horses, because there isn't enough purse money in timber races."

Brion also had a number of flat wins and some seconds in high profile flat races.

"To make a living, you have to have flat horses," said Brion, following in the footsteps of the main under whom she was assistant trainer for over a decade, Jonathan Sheppard, who had Eclipse Award winning horses both over fences and on the flat.

BRION HAS brought a number of new owners into steeplechasing, some sending horses to her from Ireland because of the size of the purses over here, and some from flat tracks, including Jordon V. Wycoff.

"We talked at Saratoga,and we got along," she said. "We went to his barn and picked out some horses that might be steeplechase prospects."

Wycoff had two winners in Clara Belle and Topic Changer at Aiken.

"When Sanna scaled back to training just timber horses, I got her hurdle horses," said Brion.

"Modus Operandi is a really nice horse," said Brion. He was the best maiden I have. I bought him last June."

Brion said she thinks Molly Fantasy will do really well next year, and that New Appointment is a very nice mare.

Brion is looking forward to the final meet of the year, the Steeplechase of Charleston on Nov. 13.

"I have three going in the 3-year-old stakes, including The Insider, that I bought from Gordon Elliot after he won at Far Hills," said Brion.

Brion also discounted rumors about The Mean Queen, including one that she had bowed a tendon.

"Absolutely not," said Brion."The Mean Queen hasn't bowed.She'll be back next year."

Also at Montpelier, Leslie Young, who is uncatchable as Trainer, Races Won, saddled Charlie Fenwick's Arrowheart, ridden by Tom Garner, to win the $15,000 maiden Claiming Hurdle by 3/4 length over Eye of Gunfighter, trained by Lawrence Smith.

That race was run over the Montpelier brush course, build by Marion duPont Scott, which is the only natural brush course that remains in this country.

Fisher saddled Bruton Street-US' South Mountain (Ire), to win the second division of the $30,000  Maiden Hurdle by a head over Quid, trained by Jule Gomena.