SARATOGA SPRINGS, N.Y.--Keri Brion saddled Theocrat and Freddy Flintshire to decimate the opposition, running first and second by a big margin in the $75,000 Michael G. Walsh Novice Stakes at Saratoga on Sept.1. 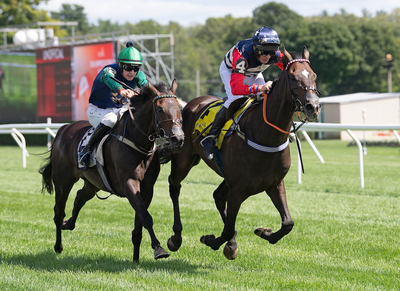 Those two were 6 /14 lengths in front of third placed Scorpian's Revenge, trained by Cyril Murphy, with Decisive Triumph, trained by Mark Beecher, who had led through most of the race, another 7 lengths back in fourth in the seven horse, 2 3/8 mile race.

"That's a nice way to end the summer," said Brion. "Theocrat has only run once in this country, and this was a jump-up in class for him. I thought he'd run well, but I didn't think he'd win it. Freddy was gaining on him, but Theocrat just had too much of a jump on him. They both ran winning races."

"BERNIE SAID that, even going to the post, Theocrat felt great and was fresh," said Brion. "To have a fresh horse now at Saratoga, that's a big thing.

"Freddy deserves a break," said Brion. "He's only 4, and he's run all season and twice at Saratoga. That takes a lot out of a horse."

"With Theocrat, it's tricky, because he'll have to carry a lot of weight because of the races he's won in Europe, even though those races weren't in the same class as what he's running in here. He'll probably go in a race at Far Hills."

Theocrat was high weight in the Novice Stakes at 159 pounds.

"It's always rewarding for a trainer to have two horses ready to run on race day," said Brion.

Brion said The Mean Queen will work on Sunday and will race in the Lonesome Glory at Aqueduct on Sept. 15, where there will be the much anticipated rematch between Snap Decision and The Mean Queen.

Cross Border won the G2 Bowling Green Stakes at Saratoga twice, most recently in 2021, but Brion said he is now going to become a steeplechase horse.

"He'll run in the 2 mile flat Stakes at Far Hills and then go jumping" said Brion. Three Diamonds Farm is a new owner in jump racing."