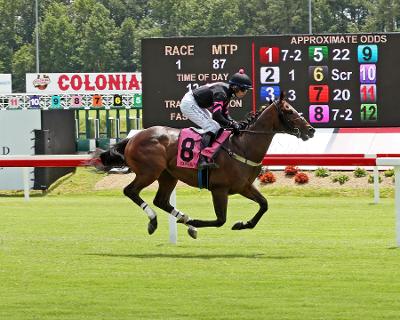 Project Two (Photo by Coady Photography)Owned  by Michael A. Smith, trained by Leslie Young and ridden by Tom Garner, Project Two went straight to the lead and drew off in the stretch to win by 8 1/4 lengths over Grey Illusion, trained by Kerry Brion, and Thai Terrier, trained by Kathy Neilson.

"I bought him last year as a 3-year-old via Archy Macauley and Clarity Bloodstock," said Young. "He'd been running in weight for age hurdle races in Ireland, and he'd been second once and third once in the summer as a 3-year-old. He got here in September, and I don't know whether it was a hard ship or what, but he just needed time."

"He ran third at Far Hills and then lost his rider at Charleston," said Young.

Project Two then didn't run from November until April.

"HE'S BEEN a different horse this year," said Young.

Project Two was fourth at Tryon, second at Great Meadow, fifth at Radnor and then won at Colonial.

Grey Illusion passed horses on the turn, but with Project Two having set such a slow pace, he had plenty left and had no trouble fending off any challenge, instead widening his lead in the stretch.

"Hopefully he'll come out of this race healthy," said Young. "Maybe then we'll try a non-winners of two later in the season at Saratoga."