Catholic Boy wins the Travers by four lengths, now a G1 winner on both dirt and turf

SARATOGA SPRINGS, N.Y.--Catholic Boy, who won the $1.25 million G1 Travers at Saratoga on Aug. 25, is now a G1 winner on both turf and dirt, having won the G1 Belmont Derby Invitational on the turf on July 7. 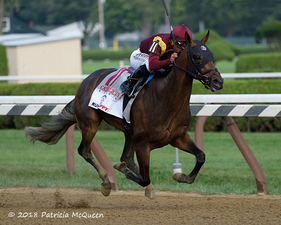 Catholic Boy winning the Travers (Photo by Patricia McQueen)In the Travers, Catholic Boy, owned by Robert LaPenta, trained by Jonathan Thoma and ridden by Javier Castellano, ran a close second to Mendelssohn, moving up beside Mendelssohn in the stretch, drifted in under right-handed whip, was corrected just before contact was made and drew clear to win by a convincing four lengths.

"It just doesn't get any better," said Thomas. "I'm just so proud of this horse, and Javier was incredible. We've always believed that he's a top talent despite the surface. He's a much stronger, mature horse and this really shows that patience helps. It means we can survive another year and hopefully train some more like him, but right now, I'm just going to soak this up."

"I CAN'T put it into words," said LaPenta. "This has been a lifetime dream for me and to win it with a horse like Catholic Boy, I'm speechless. I didn't expect this to happen. I've been in the game starting in 2001, and I never thought this day would come, and I'm so glad it did today."

"The trainer and owners gave me a lot of support to be part of this success," said Castellano. I had a lot of confidence. I went to pray every single Sunday because he's a Catholic boy.

"I felt great [around the turn], so comfortable with him because of the way he's been training. I really like this horse. He does it by himself. When the good horses show up, they are always there. He beat some good horses and a good filly and I think he's one of the best horses in the country so far."

"I basically enjoyed the ride," said Castellano. "I think Jonathan did a great job with the horse. I give all the credit to him.

"It feels so great. I'm blessed to be part of the history. There's so much history at this track. To win six Travers, I've been very, very blessed and very lucky and fortunate to be part of it. He's a nice horse. I've been riding a lot of good horses and I have a lot of support, a lot of help, for many years."

"I give all the credit to Jonathan Thomas, the way he's been training the horse - turf and dirt," said Castellano. "Basically, I enjoyed the ride today. He's so good, that horse. I've never seen a horse like that in my life. He can run on turf, dirt; I think he's amazing. He won A G1 on the turf and a G1 on the dirt, he's only 3 years old, you don't see too many like that. I've been blessed to be part of it."

Catholic Boy has started nine times with six wins and one second, winning $1,842,000.

Along with the Travers and Belmont Derby, he also has won the G3 Pennine Ridge on the turf, and as a 2-year-old won the G2 Remsen on dirt and the G3 With Anticipation on the  turf.

"This was a big improvement," said T. J. Comerford, assistant to Aidan O'Brien, of Mendelssohn, last year's G1 Breeders' Cup Juvenile Turf winner and this year's G2 UAE Derby winner who finished 20th in the Kentucky Derby and third in the G3 Dwyer at Belmont. "Aidan planned on bringing him here, and he stuck to his guns. Aidan could have easily run him on the turf at home, but he stuck with it over here. It just shows he's coming back to his best. I'm sure he'll be back in this country soon."

Bravazo, trained by D. Wayne Lukas, was the only colt besides Triple Crown winner Justify to run in all three races, finishing sixth in the Kentucky Derby, second in the Preakness and sixth in the Belmont, and he was also second to Good Magic in the G1 Haskell..

"He's been through the whole series," said Lucas. "He's keeping it honest. Nobody's stealing anything, and he's beaten some pretty good horses. I'd like to see it a jump or two longer, he might have gotten second. I liked the way he ran. He continues to add to his income and his resume."

"Good Magic didn't break well and from there he was in trouble," said trainer Chad Brown. "Given the way the track's playing, you've got to be very forwardly placed the last two days on both surfaces. I didn't feel good right away. We wanted him no worse than third early, that's his running style, and especially given the way the track bias has been. When he didn't get there, I didn't feel too good about it.

"I was hoping he could recover down the backside and he started to advance, and although he had a wide trip he was moving up a little bit. I figured it wasn't impossible. If he really runs an incredible race today, he could maybe circle them and go. But (jockey) Jose Ortiz reported to me that at the half-mile pole he started to not feel good under him. He didn't have that horsepower under him, so to speak. He just didn't have it. He wasn't pulling him there at point, so he started to retreat some."

"Gronkowski, this kind of trip on this track today was just not conducive for him to run a good race, said Brown, who also trained Gronkowski. "(Jockey) Joel Rosario said he was pulling a little bit and i could see that down inside, and he was trying to get him to switch off a little bit, and then once he did he sort of ran into a horse that was stopping a little bit and he was trying to get inside of him. He said he just never had a clear run and never felt he could make up any ground on the track today."