SARATOGA SPRINGS, N.Y.--Freddy Flintshire, trained by Keri Brion and Ridden by Parker Hendriks, scored a decisive victory in the $70,000,1 1/16 mile Allowance Steeplechase at Saratoga on July 27. 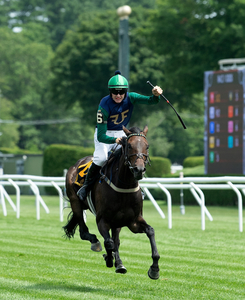 In winning, Freddy Flintshire gave Hendriks his first Saratoga win and propelled Brion into first place in Trainer, Money won, and, with 18 wins for the year so far, moved her closer to Leading Trainer, Races Won, Leslie Young, who has 21 wins.

Hendriks, who is only 18, is already Leading Rider, Races Won,, six better than second placed Freddie Proctor, and also leads in Money Won, with almost twice as much as Proctor.

It gave Brion her third win in two days, as Peat Moss had won the day before in a steeplechase at Colonial Downs and Feminista had also won at Colonial, but in a flat race.

Freddy Flintshire had run seven times unsuccessfully in maiden special weight races on the flat in this country before being purchased by Upland Flats Racing last year, and since then has run four times over fences, placing third twice and winning twice.

"I GOT Freddy as a 3-year-old, and he hasn't been off the board since," said Brion. "He's a barn favorite.  He has the best disposition. He could be a fox hunter tomorrow. He has a really good attitude, and I think that helps him."

"We'll see how he comes out of this,"said Brion. "As long as he's okay, we'll run him back again at this meet. He did it so impressively today, but he's only 4, so we want to do it right."

Hendriks said he let Freddy break off quietly as he wanted to get him in a comfortable position and that he jumped progressively better through the race.

Freddy Flintshire raced close to the back of the field until after the last fence.

"I was talking to Bernie Dalton, who was beside me the first time around, and we thought they weren't going all that fast up front," said Hendriks. "I tipped him out before the last fence, and I got caught really wide. He just cruised up to the top of the stretch. I knew he'd be genuine in front, but I looked over at the screen a couple of times and saw I was well in front. This horse has a really cool disposition."

Hendriks was interviewed in the winner's circle following the race by his sister Liza Hendriks,, who works for NYRA,

"This was my first winner at Saratoga," said Hendriks. "It's a really big deal. Keri had a super year last year, and it's been great for me. She has a great band of owners."

Meanwhile, after the last fence, a number of horses got into trouble.

Ancient Times, trained by Arch Kingsley had recently posted a front running win at Colonial Downs, and he raced comfortably in front though the entire race until the last fence, where he put in a very bad fence and dropped back, after which he was trading bumps with Welshman, trained by Jack Fisher.

Ancient Times then dropped back and nudged Proven Innocent, also trained by Fisher, nearly off course on the turn and then clipped heels with Take Profit, trained by William Dowling, and both almost fell.

Proven Innocent was able to stay on course, although he knocked over one of the cones, and went on to be second.

"French Light is retired," said Brion of the horse that bravely finished third despite his injury. "The Naylors gave him to me. He's going to be my lead pony at Fair Hill. He's always been a favorite of mine."

"Iranistan is 8, and he's not running again without Lasix, so he won't run again until the fall," said Brion. "At his age, he doesn't owe us anything."

Horses in stakes races at flat tracks have to run without Lasix, but the ruling doesn't apply to steeplechase racing except at flat tracks.

"Historic Heart will run back in the Jonathan Sheppard," said Brion.