LAUREL, Md.--Danny Lopez' Pennsylvania homebred Chubb Wagon won her division while Deciding Vote, bred and owned by Bill Pape of Unionville, Pa., leads his division of the MATCH series after three of the five legs. 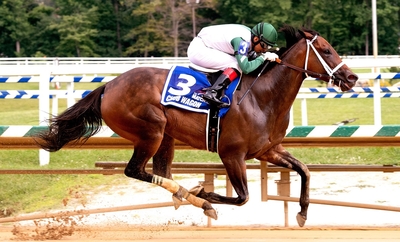 Pennsylvania-bred runners accounted for two wins and one second in two of the stakes, and the Pennsylvania Horse Breeders Association again is offering $5,000 bonuses to the top male and female state-bred runners by overall points.

In the $100,000 Alma North Stakes, Daniel Lopez and George Chestnut’s Pennsylvania homebred Chub Wagon continued her domination in non-graded Mid-Atlantic stakes with a powerful 3 length victory in the 6 1/2-furlong race, run on a sloppy track after a mid-afternoon thunderstorm.

IT WAS THE 12th victory in 13 starts for the 5-year-old mare by Hey Chub who has never finished worse than second.

Kaylasaurus, who has started in the first three legs in her division, rallied from last to second, while Cheetara held for third.

“You’re never overconfident going into a race especially when the track gets wet like today,” Preciado said. “All these horses today looked like speed. When you run with all these speed horses you see who has the speed. She’s coming around very nicely. Hopefully she gets a little stronger.”

Chub Wagon picked up 10 points for the win in her first MATCH Series start of the year.

Lopez said the mare will be pointed to the Satin and Lace Stakes at Presque Isle on Aug. 15.

She never has raced on the Tapeta surface, but her performance could be a determining factor in whether she shoots for the Grade II $400,000 Presque Isle Downs Masters Stakes Sept. 19.

The 6-year-old Pennsylvania-bred Munnings mare trained by Tim Kreiser is now poised to have an impact on the division and overall standings.

Merriebelle Stable’s Bellagama, trained by Ignacio Correas IV, rallied from ninth and last to win the 1 1/8-mile Big Dreyfus by 1 1/2 lengths over Deciding Vote, who was neck in front of In a Hurry in third on a turf course rated good after the heavy rain.

Ridden by Vincent Cheminaud, who has been based in Kentucky, the 5-year-old mare bred in Argentina previously posted a second and two thirds in stakes company since her arrival in the United States.

“She ran the last time very good (at Hawthorne Race Course),” Cheminaud said. “The grass was a little soft for her, so I preferred to wait a little bit for a good finish.”

Deciding Vote, bred and owned by William Pape, made her third MATCH Series start in the Big Dreyfus and rallied from well back under Angel Suarez, who has ridden the mare in her last three starts.

Deciding Vote, trained by Edward Graham, picked up 7 points to give her a total of 20.

She qualified for bonus money and remains the division leader with two legs remaining.

IN THE $150,000 De Francis Memorial Dash, Beren, owned by St. Omer’s Farm and co-breeder Christopher Feifarek, won after a three-way speed duel in the six-furlongrace and took the division lead after two MATCH Series starts.

Beren, who has won eight of 18 starts with earnings in excess of $600,000, broke well under Frankie Pennington and was in front through a half-mile in :44.78 while in between Special Reserve and Wondrwherecraigis, both of which were coming into the race off layoffs.

Despite the difficult position, the 4-year-old Pennsylvania-bred colt by Weigelia drew clear in the stretch to win by 2 3/4 lengths over Wondrwherecraigis, a seven-time winner, while Pickin’ Time rallied for third.

“This was a very tough race today,” trainer Robert “Butch” Reid Jr. said. “He had a position between two speed horses but Frankie did a sensational job. I was watching it unfold and Frankie looked very confident.”

“He’s a quick horse who breaks sharply, but the inside horse went for the lead,” Pennington said. “They were dueling down the stretch and I knew it would be a fight, but he ended up opening up the lead on them.”

Beren, who is based at Parx, now has 17 MATCH Series points after two starts and leads his division, which Reid noted appears to be wide open.

Reid said Beren will skip the Colonial leg to compete in a state-bred stakes on “Pennsylvania’s Day at the Races” in late August, and then race in the final MATCH Series leg at Parx.

Pocket 3’s Racing’s Threes Over Deuces, trained by Gary Capuano, finished fifth but made his third series start and qualified for bonus money.

He now has 10 points, which ties him for second with two horses that have made only one series start.

IN THE $100,000 Prince George’s County Stakes, English Tavern won after a stretch duel in the 1 1/8-mile race, but after an inquiry and claim of foul was placed second by the stewards behind Eons, who was just to his outside a nose behind.

The elevation to first gave Eons, who won the Bensalem Stakes at Parx in his first MATCH Series start this year, 20 points and the lead in the division.

English Tavern was placed second, while Pixelate was third.

“He ran a great race, regardless of the outcome of the inquiry,” Delacour said. “I thought it wasn’t an easy spot for anyone because we didn’t know how to ride the race. There was not a lot of speed, and he’s a pretty difficult horse to ride. I thought considering everything he ran great, and he’s in good form, for sure.”

Eons last year won the 1 1/8-mile Buckland Stakes at Colonial, which this year is the fourth race in his MATCH Series division.

The 6-year-old Giant’s Causeway horse is the only horse this year with two victories in a division.