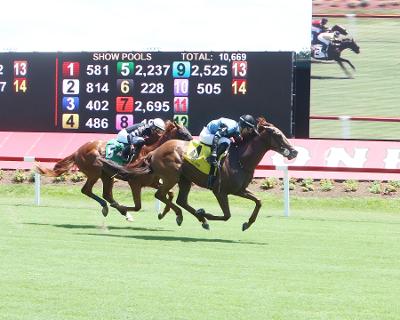 New Appointment winning at Colonial Downs (Photo by Coady Photography)New Appointment ran third or fourth early in the 10 horse field, moved up around the turn and fought past Peace Nicker, trained by Julie Gomena, who had led fro the start, to win by  3/4 length.

"We needed that,"said Brion. "I've been running horses on the flat, and they've run well and been second or third, but it's been a while since we've had a win."

"I've had New Appointment since May, said Brion. "Paul bought her in Ireland. She's Historic Heart's full sister. She ran on the flat over there. They didn't run her over fences in Ireland because the purses are so much better here, and they didn't want to miss her chances as as a maiden here. She's not easy to deal with, but at least she's worth it."

"We'll run her back in the filly and mare stakes at Colonial on Aug. 22," said Brion. "I have multiple horses for each of the races at Saratoga. I have Iranistan, Historic Heart and French Light for the Smithwick. We'll ship in for races at Saratoga."