The Horseracing Integrity and Safety Authority (HISA), much of which took effect on July 1, has had a bit of a rough start. 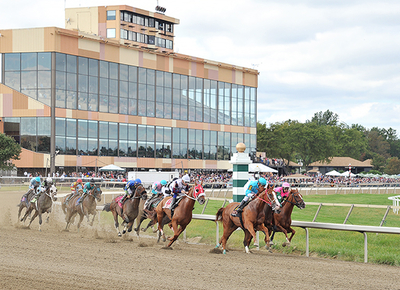 Racing at Parx (Photo by Sarah Andrew)The rule that, in order for a horse to run on any track in the United States, all owners, trainers, horses and jockeys involved had to be registered, has taken effect, but one day late on July 2, and in at least one state hasn't always been enforced.

The Jockey Club computer system, which is used for all entries, and the HISA registration system are basically incompatible, in other words, they don't talk to each other.

That has resulted in racetracks having trouble ascertaining whether a horse has been registered, and it was reported that, in California, in a few cases, if a trainer said a horse had been registered, it was allowed to run even though the racetrack could not confirm it.

Authorities are trying to figure out how to make the computers more compatible.

Trainers were worried that the bureaucrats running HISA don't know anything about racing, and in many cases their worries have been vindicated.

Rules are still all over the place and changes are being made it seems almost daily.

"THE FUTURE of our sport depends on HISA's being successful," said Duncan Patterson, who is Chairman of the Delaware Racing Commission among other responsibilities. "Most of the safety issues addressed by HISA had already been implemented in Delaware."

But Patterson admitted Delaware Park had had some issues, some of which were the regulations covering stewards being changed and then rechanged.

"The real problem has been a lack of veterinarians," said Patterson."We can't get enough vets to comply with the regulations."

Seven-term U.S. Senator Chuck Grassley of Iowa, the second-most senior Member of the United States Senate, on June 27 sent a forceful letter to the Federal Trade Commission and the Horseracing Integrity and Safety Authority demanding answers to questions about their failure to comply with the enabling federal legislation’s deadline of July 1 for implementation.

Among other things, Senator Grassley’s letter questions if the Authority consulted appropriate industry representatives before issuing regulations that appeared to ignore volumes of public comment pointing out deficiencies.

At least two law suits have been filed in federal courts questioning the constitutionality of the Authority, which would operate under the review of the Federal Trade Commission.

Alaska, Arkansas, Idaho, Mississippi, Nebraska, Ohio supported a lawsuit against HISA. filing a brief supporting a lawsuit led by Louisiana, Oklahoma, and West Virginia that argues the structure of the Horseracing Integrity and Safety Authority is unconstitutional.

STEEPLECHASE racing doesn't come under the jurisdiction of HISA, but HISA has new rules for the use of whips pn horses, and those rules do apply to steeplechasing.

Jumping's first summer race takes place at Colonial Downs on Monday, July 11, and, while jockeys have until Aug. 1 to get crops compliant with HISA rules due to a lack of supply of the new whips, the new rules on whipping will be in effect for steeplechase jockeys.

Jockeys are allowed no more than six strikes of the whip on the horse’s hindquarters, with no more than two permitted in succession, with accelerated fines and punishments for the number of strikes above six.

A jockey is allowed to use the whip on a horse's neck, provided his hand is on the reins, but it counts as a strike if his hand is off the rein.

But what many owners don't know is that if the jockey is caught for a second time over-using a whip the owner loses the purse money.

This seems a very unfair rule, as most, if not all, owners have no say in who rides their horses as trainers hire the jockeys, nor will they probably even know if the jockey named to their horse already has one violation.

This rule was apparently requested by the jockeys, who claimed an owner might say he'd pay the jockey's fine if the rider had to whip a horse in order to win.

Petterson said the whip rule (but not the part of owner's losing the purse) has been in effect in Delaware for a while and that, in fact, it had resulted in horses going straighter as jockeys had both hands on the reins.

DRUG RULES now vary state to state, and HISA was originally formulated to deal with drugging of horses.

But the anti-mediation control program doesn't even go into affect until next January, while HISA is currently administrating a number of other rules.

The rules on pin firing and freeze firing are being changed, and the rule on horseshoes now will not go into effect until Aug. 1.

Trainers agree drug rules need to uniform throughout the country, so for that they are almost uniformly in favor of HISA.

But much of the adverse publicity towards racing has come from the number of horse's deaths on the race track, and HISA doesn't address the biggest reason for that at all.

Most of those horses' deaths have come from trainers over racing horses and from racetrack surface issues.

Racetrack surface issues can certainly be addressed, but regulating a trainer's over-racing a horse or running a horse close to breaking down would be more difficult to address.

Patterson said that the latter problem could be addressed by strict pre-race regulation on horses and using a safety steward whose only responsibility would be to watch horses training in the morning.