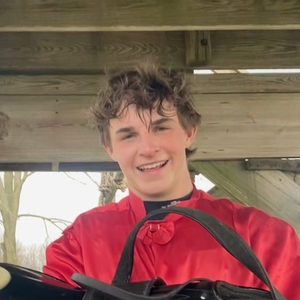 "We claimed Grey Ghost a year ago and then ran him back on the flat at Colonial," said Joe Davies. "He was second in a $50,000 Maiden race with Forrest Boyce riding."

Davies ran him back on the flat a number of times after claiming him, with that second at Colonial his best finish.

"This winter, Teddy has been schooling him over fences," said Davies."This was his first start over fences.He's entered back at Radnor, and hopefully he'll go to Colonial this summer."

"Brave Deacon fell in a race last fall, then this spring he was second at the Blue Ridge Point-to-Point," said Davies. "Then he won Saturday. It was only a two horse race, but it was still a good win. He'll run back at Colonial."

Willie White rode his own Night Sounds, trained by Elizabeth McKnight, to win the $2,500 Novice Timber as the only of four entries to finish, as two went off course and the third lost his rider.