MIDDLEBURG, Va.--Todd Wyatt saddled Be Counted to win by a nose over Lonely Weekend, also trained by Wyatt,  at the Middleburg Point-to-Point on May 1. 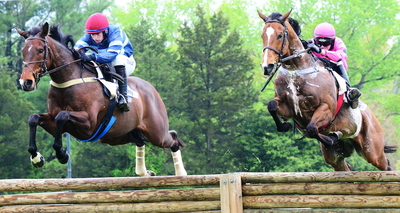 Be Counted, left, and Lonely Weekend over the last fence (Photo by Betsy Burke Parker)Peter and Sarah Jay's Be Counted, ridden by Colin Smith, led for most of the race with Riverdee Stable's Lonely Weekend, ridden by Tom Garner, tacking him until the final fence, when the two jumped together, with Be Counted just nosing out his stablemate at the wire.

"Be Counted won at Piedmont earlier this year," said Wyatt. "He's a nice horse that we had running over hurdles before. We're pretty excited to have him running over timber now. He'll probably run next at Willowdale."

Be Counted won three times on the flat in claiming races and then won twice over hurdles before being converted to timber this year,

"Lonely Weekend will run back at Winterthur," said Wyatt.

"PleaseCallMeBack ran at Camden,his first time over hurdles, and he scared himself," said Brion. "We were trying to give him a good experience. He's probably run next at Radnor or maybe wait until Colonial Downs."

Niall Saville and Neil Morris had two winners apiece on the flat, Saville with Stormyvale Farm's Bay B and Freya Gerlach's Boppin Road, and Morris with La Hara Partners' La Hara and PathFinder Racing's In Effect.

Overdrawn and Night Sounds, who finished second, started to follow Mr.Fine Threads off course but corrected in time to stay on course.

Hendriks, Smith and Garner each had two winning rides at Middleburg Point-to-Point.