LEXINGTON,Ky.--Graham Motion had three stakes winners in the one week, two 3 year olds at Keeneland and a 4-year-old at Gulfstream. 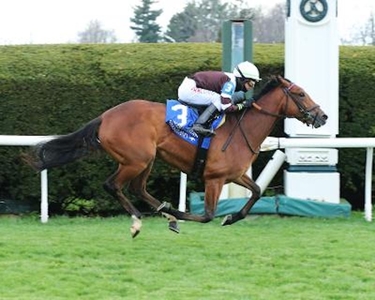 Spendarella winning at Keeneland (Photo by Coady Photography)Gainesways Stable's homebred Spendarella won the G2, $400,000, 1 mile Appalachian Stakes for 3-year-olds on the turf by 1 3/4 lengths on April 9.

"Spendarella might go to England, to Ascot for The Coronation Stakes,"said Motion. "We've run horses in that before. This filly hasn't done anything wrong, and she'll like the distance."

The Coronation Stakes is a Group 1 stakes to be run Friday, June 17 at Ascot at about 1 mile.

Sy Dog has also now run three times, winning all three, breaking his maiden at Belmont on Oct. 10, 2021, then winning the Central Park Stakes at Aqueduct on Nov. 27.

"He won very nicely," said Motion. "He''ll possibly run back on Derby day in the American Turf Derby. That's a graded states for 3 year olds. It's unusual to have two such nice 3 year olds in the same year."

CRYSTAL CLIFFS, owned by Michael Dubb, Madaket Stables, Wonder Stables and Michael Caruso, won the $100,000, 1 1/16 mile Sand Springs Stakes for fillies and mares 4 years and up on the turf at Gulfstream by 2 3/4 lengths on April 2.

"She'll run next in either the Modesty or the Gallorette," said Motion.

The Modesty is run at Arlington Park and the Gallorette is run at Pimlico on Preakness day.

Treasure Tradition  ran between horses prompting the pace down the backside, went to the lead leaving the turn and drew off to win by 2 1/4 lengths.

Union Folly was slow to get going, was four wide on the turn and drew away  in the stretch to win by 2 lengths.

Caravel, who was bred by Liz Merryman and campaigned to numerous wins by her, has since be sold to Qatar Racing and Marc Detampeel, and she won on March 19 for her new owners.

Merryman first sold 75 percent of the mare to Bobby Flay, who sent her to Motion to train, and he ran her three times with one third.

Flay and Merryman sent Caravel to the Fasig-Tipton November sale last year where her present owners bought her for $500,000.