Todd Wyatt wins six in one day, with four at Elkridge-Harford

MONKTON, Md.--Todd Wyatt had a superlative day on Saturday, April 9, training winners of six races, with four at Elkridge-Harford, including one by his 14-year-old son James. 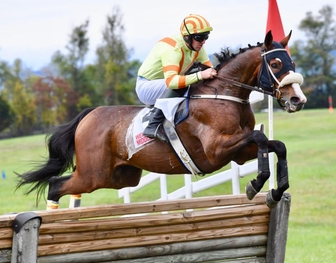 A horse in a steeplechase raceWyatt won two at Old Dominion the same day, see story posted April 12 in RACING.

"Include It won here last year,"said Wyatt. "He's won four now. Elizabeth works for us, and she's been hunting him all winter, She did a good job with him. He'll probably run next at the Grand National or Middleburg."

Wyatt won with Mrs. S.K. Johnston's Lost It, ridden by Scully, in the next race, the Novice Timber, in a walkover when Profiteer lost rider Eric Poretz early in the race.

"He galloped around on his own," said Wyatt. "He jumped nicely. It's hard to run alone over a course like Elkridge-Harford. He'll run back at the Manor."

"Prime Prospector is an old timber horse of Peter and Sarah Jay's that we campaigned," said Wyatt."Elkridge-Harford does a good job of having races for the kids."

Wyatt's fourth win of the day was with Jennifer Pitts' Lear Avis, ridden by Scully, in the 1 mile Amateur Flat race.

"She's a mare owned by a lovely local rider," said Wyatt. "She's coming off a layoff. She'll run over hurdles next."

Joe Davies saddled the winner in the only other timber race, the Heavyweight.

There were eight races for youngsters.

Libby Tallarico on Carroway Tuesday won the 1/4 mile Shetland Pony race in a field of three, Yomat Ortiz on Lickty Split won the Small Pony race over a field of four., and Ellet Sharp won the Medium Pony race on Fiona over three other ponies.

Carly Kern won all three Junior Field Master Chases for ponies, riding Mallory to win the Small, Roger That to win the Medium and Goose to win the Large.