MONKTON, Md.-Teams from Elkridge-Harford Hunt placed both first and second in the Foxhall Farm Cup Team Chase on March 20, beating a field of 17 from four different hunts. 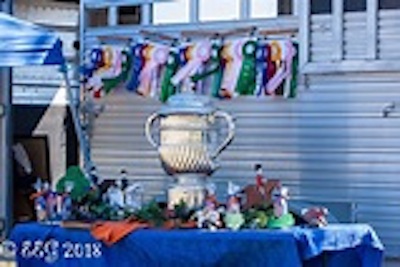 "Ashton is my longtime assistant who gallops horses for me," said Joe Davies, Teddy's father and co-Master of Elkridge-Harford. "Aston was riding Pocket Talk who is a Maryland Hunt Cup hopeful."

"Theresa is an avid fox hunter who works for a neighbor," said Davies. "She used to work for Jonathan Sheppard. Blackhall is also nominated for the Maryland Hunt Cup. Teddy was on Our Friend, a young horse who is also a long time Hunt cup hopeful, as are all of mine. I take the field on Our Friend."

"They were just having a good gallop," Davies said. "They were told to walk through the water. All those horses hunt regularly."

IN PAST YEARS, the hunt that won the Cup was required to host the meet the following year, but that was changed a couple of years ago.

Davies said that it had gotten to the point that, if one hunt won it a few times, it might begin to hope it didn't win it again so it wouldn't have to host it the following year.

To make planning easier, it was decided the Cup would be held two years at Elkridge-Harford, two years at Green Spring Valley Hounds and then two years at Cheshire Foxhounds.

There were eight teams from Green Spring Valley, five teams from Elkridge-Harford, three teams from Cheshire and one from Piedmont Fox Hounds competing.