Graham Motion has a young stakes winner, and McLane Hendiks has a first time Maiden winner

FAIR HILL, Md.--Graham Motion, based at the Fair Hill Training Center, saddled three horses in Stakes at Gulfsteam Park on March 5, with one winning impressively and two finishing good thirds. 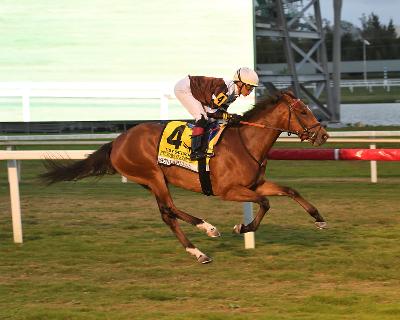 This was only Spendarella's second race after winning a Maiden Special Weight at Gulfstream on Feb. 2 by 2 3/4 lengths.

"We'll probably run her next in a Stakes at the beginning of Keeneland,"said Motion. "I think it's a Grade 2 race. Depending on how she runs in that, we may take her to Ascot. We've discussed that."

English Bee now has six wins, three of them in stakes, three seconds and three thirds with earnings of $504,740.

"English Bee is a hard knocking, blue collar horse," said Motion. He's a barn favorite. He likes hard turf. We'll probably run him once more and then look at the summer's turf races. He's a lovely horse to be around."

Motion said Calumet will continue to run him rather than retire him to stud.

"It's so hard to establish a turf sire," said Motion.

"She could go next to Santa Anita," said Motion.

"Candy Light is nominated in a stakes at Laurel next," said Motion. "She was unlucky not to have won before. But that stakes is in three weeks, and I'm not sure I want to run her back that quickly."

Jean Valjean raced close to the pace and drew clear in the stretch to win by 3 lengths.

Hendriks, who only recently started training, having taken over his mother, Liz Merryman's stable, has already saddled one horse, Witty, to win two stakes plus now this maiden winner.