LAUREL, Md.--McLane Hendriks, after basically taking over from his Mother Liz Merryman in training her string of racehorses based at the Fair Hill Training Center, saddled his second Stakes winner, Witty, at Laurel on Jan. 29. 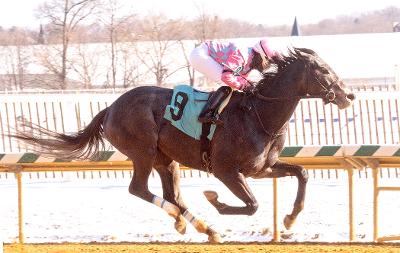 "I bred both the horse and the trainer," said Merryman. "That was McLane's third win since taking over from me. He won a Maiden race at Parx with Bradix, another horse that I'd bred. Bradix was my Father's middle name."

"I was diagnosed with breast cancer in June," said Merryman. "That was a big factor in my selling the majority interest in Caravel."

Caravel won five stakes trained by Merryman before she sold her to Bobby Flay to be trained by Graham Motion.

Both Caravel and Witty are out of Merryman's Zeezee Zoomzoom.

"When McLane came back from Saratoga last August, he basically took over the training from me," said Merryman. "I had surgery the end of August and chemo after that, so I couldn't put 100 percent into training. i still come in when I can. Some days I have chemo, some days I feel sick, so it worked really well for McLane to take over. He's really into it. Next I have five weeks of radiation daily, so that's like a full-time job."

"McLain's taken over my string at Fair Hill," said Merryman. "He has a dozen or so in training. My brother Edwin and I share a barn at Fair Hill. Edwin has five or six in training."

"WITTY WAS very impressive winning at Laurel,"said Hendriks. "He's won three in a row now. It's been a challenge training him, because the dirt track at Fair Hill is closed for the winter. It's hard to get a horse fit training on the Tapeta track, so we shipped him to Pimlico."

Wity, a 3-year-od gey gelding, placed second in his first race, a Maiden race at Laurel last September, then won a Maiden Special Weight at Parx in October, followed by a win in the Pennsylvania Nursery Stakes on Dec. 7 and his win at Laurel.

"We'll probably stretch him out to two turns next time out,"said Hendriks."We're not in any rush to run him again with track conditions the way they are."

As to continuing to ride races while training, Hendriks said,"I'm thinking about it. I'm just starting to get fit."

Hendriks gets on a few of his horses at Fair Hill while Taylor Letterman, who won pony races at steeplechase meets and now works for Hendriks, works most of his string. 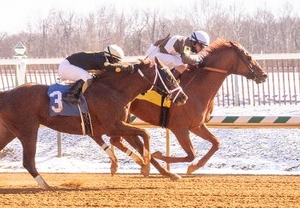 Cordmaker (Photo by James McCue)Cordmaker determinedly prevailed in the Jennings by a neck to win his eighth stakes and his 13th victory with four seconds and seven thirds from 35 starts.

Spendarella was forwardly placed throughout the race, dueled for the lead around the turn and widened  to the lead in the stretch to win by 2 3/4 lengths.

Hot Rod Charile won the GI Pennsylvania Derby last year as well as placing third in the Kentucky Derby and second in the Belmont Stakes.

Hot Rod Charlie held a narrow lead around the first turn, was second to Al Nefud on the backstretch and moved into the lead in the stretch to win fairly easily.

Hot Rod Charlie is aimed for the G1 Dubai World Cup on March 26.

JACK DOYLE, who was tied for Leading Rider in Steeplechasing in 2019, won a Maiden race at Fairyhouse Racecourse in Ireland on Jan. 29, riding Flame Thrower, trained by his father, Pat Doyle.