ERIE, Pa.--Jonathan Sheppard had a pretty spectacular day on Sunday, July 8, when he saddled two winners, including one in a $100,000 stakes plus a second place finisher at Presque Isle race track. 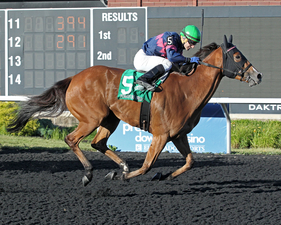 Then Sheppard saddled his own Auntie Mame, also ridden by Speith, to place second in the third race, a $13,000 claiming race.

In the fifth race, Buttonwood Farm's Rose Tree, ridden by Andrew Wolfsont, won the $100,000 Northern Fling Stakes for registered Pa.- bred fillies and mares, 3 years old and up, at one mile.

Sheppard has kept his mares and foals at Buttonwood Farm for a number of years, and a few years ago the Moorheads, who loved watching the foals playing on their farm, decided it would be fun to have some of their own to watch on their farm.

SO THEY asked Sheppard to buy them a few broodmares.

Rose Tree is by Harlan's Holiday out of Amusing, by Distorted Humor, and she was the Pa-bred champion 2-year-old filly in 2016.

"I thought it was a pretty tough race," said Sheppard. "She hadn't run in six months. There was a lot of speed in the race. I was afraid she'd have trouble finding room to maneuver in a 12 horse field. "

Sheppard said he was worried that, when the speed horses stopped, Rose Tree might get caught inside with no room to run. 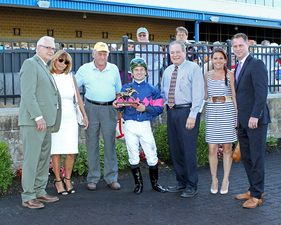 The presentation of the 10th Running of The Northern Fling Stakes. Jonathan Sheppard, second from left, and Andrew Wolfsont (Photo by Cody Photography)"She had been training very well," said Sheppard. "We did a couple of mile works that I think helped."

Sheppard said that Rose Tree had just had a couple of minor problems.

She had run third in the Florida oaks, only beaten 3 1/2 lengths on the turf, but that they felt she wasn't moving 100 percent after the race, only moving about 90 percent, so they decided to give her some time off.

"She's come back strong," said Sheppard. "There are a couple of turf stakes at Parx over Labor Day that we're looking at."

He said that he rode Speith in the first two races because he uses him on his horses at Presque Iisle and his agent is very helpful in entering races there for him, but that they imported Wolfsont to ride Rose Tree as he was her regular jockey.

William Pape's War Baby was second with the favorites Imply and Great Soul coming in third and fourth.

War Baby is one of my all time favorites," said Sheppard. "She's one of Bill Pape's, and she was raised on the farm, and I trained her until she as 3. I have a particularly soft spot for War Baby. She was quite a bit of a character." 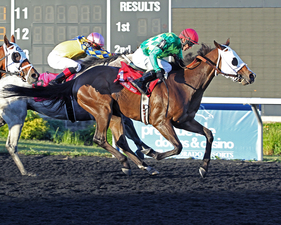 BEYOND SMART The 11th Running of The Leematt Stakes (Photo by Coady Photography)In the Leematt Stakes for registered Pa,-breds, 3 years old and up, at one mile, Beyond Smart, who was bred by George Strawbridge, is owned by Tim Girten, Donald Brown Jr., and Muirfield Farm and ridden by Spieth, won by 3/4 length over Fast and Accurate and Bern' James Bern.

Beyond Smart, unhurried for six furlongs, moved three wide into the stretch and drove with determination between rivals in deep stretch and edged away at the wire to win by 3/4 length.

Fast and Accurate was second by a neck over Bern' James Bern in the nine horse field.