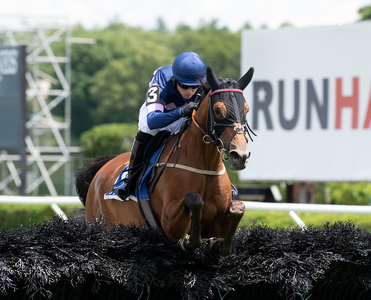 Baltimore Bucko leads the second time past the grandstand (Photo by Tod Marks)"Incredible," said Brion. "It hasn't really sunk in yet. People dream of things like this."

Baltimore Bucko went right to the front and led the six horse field over all eight hurdles and finished strong in the flat portion of the race, which is almost 1/2 mile as they last hurdle is taken out at Saratoga in the hopes of avoiding falls.

French Light gave Brion the exacta when finishing 2 3/4 lengths ahead of Gibralfaro for second.

Baltimore Bucko, who was making his graded stakes debut, won for the first time in five starts in his 5-year-old campaign although he did finish second by a nose in the Novice Stakes at Iroquois and was on his way to winning in Ireland when he fell at the last fence,

“My other two need something to run at, and I didn’t think there was much pace, so I figured maybe he would get loose on the lead and no one would catch him,” said Brion. “That was the tactical plan. It’s hard to have three in a race and figure out what the best thing to do is. Tom gave him a great ride and no one came after it. They kind of gave him the race, but I’m not complaining.”

"I CREDIT a lot of this win to Tom." said Brion. "For Bucko, being trained in Ireland, he was trained for stamina, and I think that stamina that was trained into him really showed today,"

Gibralfaro, one of two entrants for Hall of Fame conditioner Jack Fisher, ran third in the Smithwick for the second consecutive year, while Redicean, trained by Leslie Young, Galway Kid following, and Cite, trained by Fisher, finished a distanced sixth.

Garner won a G1 at Saratoga for the third consecutive year, after piloting Winston C to scores in both the 2019 A.P. Smithwick edition and that year’s New York Turf Writers Cup both trained by Jonathan Sheppard with Brion as his assistant trainer, in addition to winning the 2020 New York Turf Writers Cup, now renamed in 2021 for Hall of Fame trainer Jonathan Sheppard, with Rashaan, trained by Young.

"We won a lot of grade ones up here while I was Jonathan's assistant," said Brion. "I didn't think it would be that different, but it was very different when I watched Bucko and French Light battle it out down the stretch. I learned so much from Jonathan. I've taken so much off him."

“I rode him exactly how I wanted to,” Garner said. “I was worried Jack might put Cite in front, but we got a nice easy lead of the race, and I jumped off into a real strong gallop. I took a pull three or four times just to stack them up behind me, and I could use his jumping to kick on down the back. I really thought someone should have come to me a lot sooner, but then again my lad may have actually carried me further. He’s done it really nicely and I haven’t even given him a smack with my stick. I was really happy with the way he won it, and he’s a horse for the future.

“The ground is still on the slower side, so I kept taking a pull to let him fill his lungs up a little bit,” Garner said. “He’s helped me out as much as I helped him out. I was almost a passenger for most of the way and I just had to help him out that last couple of furlongs."

French Light earned black type in his first graded stakes appearance under Richard Condon and this was French Light’s first race since April when running ninth in a two-mile race in Ireland.

“The difference between Baltimore Bucko and French is that Bucko had a run. French hasn’t run since Ireland,” Brion said. “In a month, the tables might turn. But I was delighted with them. Galway Kid, to be fair, isn’t as fast as the other two. He needs farther, but I was happy with him. I  probably won't run him back up here."

"I'll be really interested in seeing how French Light runs back now that he's had a start in this country," said Brion. "He had two strikes against him today, he hadn't started since April and he has a rider who'd never ridden him before. Richie Condon wad scheduled to ride him, but he was sick this morning so Harrison Beswick stepped in.

Brion was an assistant to Sheppard for 11 years, learning under one of the best jumps trainer in history who himself won the A.P. Smithwick six times.

Following Sheppard’s retirement in January, Brion took over for a legend, with this race marking her first Saratoga starters.

Now, Baltimore Bucko and French Light are both aimed for the race named for Brion’s mentor in the G1, $150,000 Jonathan Sheppard on August 19.

“When I heard they changed the name that has been in the back of my mind the whole time, so I hope I can come back with these two and maybe another one and give it a go,” Brion said.

“I learned so much from him. Even how I brought them up here and how I got them here two days ahead of time, which is something Jonathan always did,” Brion said. “There’s just a lot of preparation. We worked him in the field two weeks ago, worked him on the track last week and that’s what he always did to get ready for the Smithwick. I feel like I’m so fortunate to have worked for him, I have learned so much. My success is just the product of him, honestly. I’m very lucky."

"Bucko, French Light and Galway Kid shipped up last Tuesday and are stabled in the receiving barn," ssid Brion. "They're going back down to Pennsylvania to Rod Moorhead's Buttonwood Farm because they can't go back to Fair Hill until Aug. 1 because of the quarantine. The two Novice Stakes horses (The Mean Queen and A Silent Player ) will move to the Stakes barn tomorrow. I'm staying up here with them."

"I'm so appreciative of my owners, how Rod, Irv and Ed (Swyer) have been so loyal to me," said Brion. "I'm humbled by the fact that they've stayed with me after Jonathan retired. They could have gone anywhere. It all came together today."