CAMDEN, S.C.--Arch Kingsley trained two winners and a second as well as riding one of the winners and the second placed Show Court in the featured $35,000 Carolina Cup Ratings Handicap Hurdle to win the Leading Trainer title at his hometown races, the Carolina Cup, in front of a huge,enthusiastic and joyously unmasked crowd on May 22. 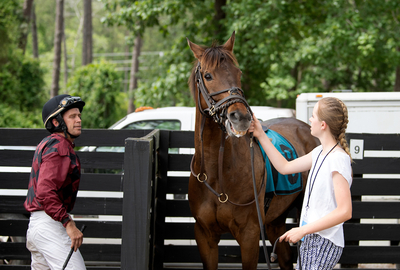 Show Court with Arch and Taylor Kingsley at the Carolina Cup"To be able to do that in my hometown was great," said Kingsley, who saddled Hurricana Farm's Mini P (Ire), ridden by Jamie Bargery, to win the first division of the $20,000 Maiden Hurdle by 3/4 length in 3:55 4/5, the fastest time of the 2 miles and 1 furlong races.

"Show Court gave me the ride of my life," said Kingsley, who returned to riding this year after having retired from riding eight years ago. "He's so fun to ride. He's like riding a lion that can fly. He's so brave, and he jumps like he has wings. I'm so proud of him."

Kingsley said during the Carolina Cup that the Cup race would be his last, but a day later he said tat Show Court "may have one more last one."

"There's another race he's qualified for at Tryon," said Kingsley. "He likes this hard ground, and he can't be carrying too much weight. He's the reason I'm riding again."

SHOW COURT was second to Noah and the Ark (Ire), owned by Keystone Thoroughbreds, trained by Todd McKenna and ridden by Harrison Beswick, competing in his first race in this country.

"Luckily for Todd, he just had a better horse on the day," said Kingsley.

"This past winter, our daughter Taylor rode him to a bunch of wins at class A shows, and she hunted him," said Kingsley. "And he's won a couple of Field Master Chases with Taylor. He's been an absolute diamond. He's like a family member, and he just keeps giving on giving."

"I bought Mini P from Christophe Clement, who said he thought he's make a steeplechase horse,'" said Kingsley. "That was his first race over fences. He's a big shouldered, big, athletic horse. Yesterday worked well, because he got a lead around the first circuit, where he was a little green, and then he took over when he felt more confident. It's so rewarding to watch a horse grow up."

"Jaimie is over here from England," said Kingsley. "He got here for Middleburg. He rode Kilronan for me in the Carolina Cup. That was really too bad, as he was going really well, and then he got taken out of it when Pik Em fell and had to pull up."

"Seeking Albert is a very talented horse," said Kingsley. "I might run him at Tryon or Iroquois. His owner is a big flat owner, so he'd love to see him run over hurdles at Saratoga."

"She was wonderful," said Beecher after the race. "We thought she'd be ready to do well here. It was a brilliant win for the owner, who is here today."

Bary Foley rode Beverly Steinman's Be Somebody, trained by Doug Fout, to win the $10,000 Maiden Claiming Hurdle by 1 1 /4 lengths.

"He had plenty of experience coming into this race, and that experience probably helped him over the last two fences," said Foley.

Be Somebody did indeed have plenty of experience, having stated 11 times over fences before this race.