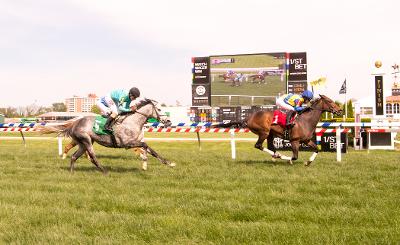 Moon Chant winning at Pimlico (Photo by Jim McCue)"I didn't think she'd get claimed," said Houghton. "Grass horses don't run that much. But losing her is just part of the business. We bought her from her breeder, Ed Graham. She really likes the grass."

Moon Chant, a 6-year-old, has started 29 times with four wins, six seconds and six thirds, and this was her first start this year.

"She was the only horse Doug had," said Houghton. "He did say he wanted another horse, so we'll either sell him one or we'll claim one for him."

"Mom had a good night," said Houghton. "She was first and second. Amigos Tune has done real good for us. This was her second win this year. She stated out running in claiming races, but she's just gotten better and better.

Houghton saddled another homebred of his mother's, the 3-year-old Traders Luck, to win his first start, a $31,600, 5 1/2 furlong Maiden Special Weight back on April 7.

"This one Mom bred out of one of her better mares, Deanies Dancer," said Houghton. "But I can't seem to find another race for him. I'm looking for an allowance. I think he wants to go farther, but not yet."

This was White Winged Dove's first start this year, and she now has started four times with one win and one third.

Drakesboro Wildcat now has one first and one third from six starts.

ELIZABETH MERRYMAN saddled Ellendale Racing LLC's homebred Touch Me Not to win a $20,000, 7 furlong Waiver Maiden Claiming race at Parx back in March.

From 11 starts, Touch Me Not has now won once with three seconds and one third,